21 year-old Lindsay airman, son of Mr. Huber Conley, of Lindsay, now of Peterboro, who was recently reported in a "dangerously ill hospital" somewhere in England. Gunner Conley is reported to be progressing favorably.

A telegram dated at Ottawa May 9 was received by Mrs. Chas. Woodley Albert St. S. Monday morning to the effect that her nephew Sgt. Jim Conley 21 year old son of Mr. Hubert Conley of Peterboro formerly of Lindsay was seriously wounded on active service on May 5th and on May 8th was in a critical condition in a hospital Somewhere in England.
Just last Saturday his father had received a letter from him in which he said he had reached his ambition that of attaining the rank of gunner on a Lancaster bomber. A cable from Jim arrived shortly after the telegram with a birthday greeting to his father.
Mr. Conley and his youngest son Jack, and the Woodley family and other friends are anxiously awaiting further word. They are grateful that Jim is on British soil and they know he will receive all that modern medical science has to offer.

Another telegram from Ottawa regarding the condition of Sgt. Jim Conley who was last reported seriously wounded has been received by his aunt Mrs. C. Woodly, Albert St. S.
The telegram stated that Jim was progressing favourably and was taken off the "dangerously ill" list.
Friends will be very pleased to hear this news and to know that the family attribute his rapid progress definitely to a prayer answering God.
Media Type
Newspaper
Image
Text
Genealogical Resource
Item Types
Articles
Snapshots
Clippings
Notes
This card is part of a larger collection of World War II personnel clippings. The project began in 1944 at the Lindsay Library. The intent was to gather together as much information as possible on the military record and the service of people from the Town of Lindsay and the County of Victoria (now Kawartha Lakes) who served in the war. To that end, during the years 1944, 1945, and 1946, members of the public donated photographs and updated information about their loved ones. Both library staff and the public saved and donated newspaper clippings. Some of the files contain great amounts of detail, while others have just a name.
Date of Publication
11 May 1943
Subject(s)
Military life
Soldiers
War casualties
World War II
Royal Canadian Air Force
Soldiers -- Wounds and injuries 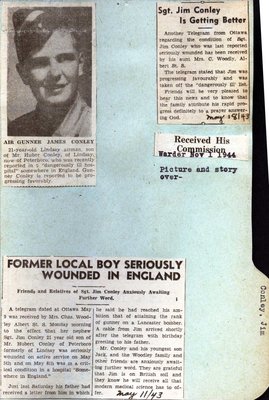