Full Text
November 16, 1944
TALK BASED ON FACTS LEARNED DURING STAY WITH CANADIAN ARMY
Milk Sells There At 40 Cents Per Quart – Butter At $1.10 to 1.25 Pound in Country Where Price Controls Do Not Exist.

Since returning to Lindsay from Newfoundland where he has been stationed for the past two years, Staff Sgt. Gerrard Connolly, son of Mr. and Mrs. J. Connolly, town, has been called upon to address two very interesting meetings, one held in Oshawa by the Knights of Columbus and the other here under the auspices of St. Mary's Young People's Association.
It was the privilege of all attending these meetings to listen to the address on "Life in Newfoundland" as presented by Sgt. Connolly from first-hand information gained during his stay there. It is the pleasure of the Daily Post to carry this interesting talk.

"I feel indeed greatly honoured in being called upon to give this short address on Newfoundland and the work of the Knights of Columbus in connection with their Canadian Army Hut project.

The island of Newfoundland is located in the Gulf of St. Lawrence. Ships operating between Great Britain, Montreal and Quebec must either pass through the Strait of Belle Isle which at a point is only 12 miles wide and is frozen over for a period of 5 to 6 months of the year, or, by the other and longer route, through Cabot Strait which is 65 miles in width, which separates Cape Breton Island from Newfoundland.

People of Newfoundland are of British decent with a strong flow of good Irish blood through their veins. They are by far the most hospitable people I have yet had the privilege to meet, even though the living standard of the people as a whole, is far below that of the average Canadian family. They think nothing of inviting a Canadian soldier in and giving him the very best available. As an example of this I will site an instance which happened to me when I was in Lewisporte, a small fishing centre some 175 miles north of the city of St. John's. As you may be aware there is no Wartime Prices and Trades Board in Newfoundland. Therefore inflation is at its highest peak. In the Lewisporte area, the price of butter ranges from $1.10 to $1.25 a pound, eggs are not bought as we are accustomed to buying them in Canada by the dozen—in this area they are bought for 9 to 11c an egg. Milk runs, as high as 40c a quart. I happened to be in Lewisporte on a Sunday and I was honoured by being invited for Sunday dinner. Now mind you these Newfoundlanders did their best to obtain butter, eggs and milk for me because they knew that we were accustomed to that food, even though the prices they were forced to pay were quite exorbitant and during wartime, these staple foods are not in their diet.

The city of St. John's is the largest and capital city of Newfoundland.

It is located on a beautiful landlocked harbour and has a normal population of 35,000 people but since the beginning of the war it has been stepped up to over 85,000 due chiefly to the fact that Canadian and American soldiers bring their wives and families to live in St. John's while they are stationed in the vicinity.

Housing facilities are definitely overcrowded—last spring families were living in the police station till accommodations were located — likewise all places of entertainment such as theatres, bowling alleys and dance halls. Naturally the civilian population is given a high preference in the procuring of tickets and reservation.

In the fall of 1942 the chief centre of entertainment for the Canadian Armed Forces in the St. John's area, the Knights of Columbus Army Hut was burnt to the ground. In this disastrous fire about 125 lives were lost. At least 20 girls lost their lives and the rest were servicemen. It must be borne in mind here that Canadian servicemen gallantly sacrificed their lives so that the girls could be dropped out of the windows to the snow below. Many a Newfoundland girl owes her life to-day to such heroic action of our Canadian Armed Forces and this action has endeared a fervent love in the hearts of the Newfoundlanders for Canadians. This fire was sabotage, cooly and deliberately planned to occur during the Christmas season, so it would lower our moral. Remember in 1942 things were tough as far as the war was concerned.

That fire did not stop the Knights of Columbus in their effort to give the best entertainment to Canadian Armed Forces possible. They immediately began to plan for a bigger and better Knights of Columbus Army Hut in St. John's. In the fall of 1943, less than a year after the fire, a much larger and better equipped hostel was opened in St. John's. This Army Hut is located within walking distance of the largest Canadian Army Camp in Newfoundland, and as such is highly patronized by our boys, more so than any other hostel in St. John's, due to the fact that they have up-to-date equipment.

Perhaps now you would like to hear a little about the Industries of Nfld. The fishing industry of course provide the Newfoundanders their quarter of the people of Newfoundland being engaged in the catching and curing of fish [sic]. Cod are caught, in the bays and inlets along the shore and some on the Grand Bank. While the latter fishing ground is open to all nations, the necessary bait for the most part is found within the territorial waters of Newfoundland, that is, within three miles of the coast. The privilege of selling bait to foreigners is jealously guarded by the islanders and is a source of considerable revenue. Salmon, herring and haddock are also caught on the Grand Bank. A great deal of Cod is dried before being exported. Lobsters are trapped along the shores and a part of the catch is shipped to the United States, the remainder canned in factories along the coast. Fresh water fishing is also of importance, the streams of the island teeming with salmon and other fish.

Sealing is the industry next in importance. Each year thousands of seals, which have taken refuge on the ice to bring up their young are carried along the coast of Labrador and Newfoundland on the ice floes. These seals fall an easy prey to the hunters, who set out early in spring in vessels specially constructed for navigation among the ice. The hunters make their way from floe to floe, slaughtering the seals with clubs and carrying away the skins and blubber. The industry is dangerous but very profitable.

The island is rich in minerals, so that mining is likely to displace fishing as a leading industry. Iron ore, exported largely to Sydney N.S. and coal are the chief mineral products. Vast deposits of gypsum are found on the western coast. Copper, lead and asbestos are produced in paying quantities.

The soil of Newfoundland is in general cold and wet and not well adapted for farming. However there are large tracts of fertile land in the river valleys.

The rivers are small and for the most part are not navigable [cut off] largest are the Humber which [cut off] from Deer Lake to the Gulf of the St. Lawrence on which is located [cut off] pulp and paper town of Cornwall [cut off] brook. The other is the River of Exploits which flows from the interior of Newfoundland from Red Indian Lake through the towns of Grand Falls, Bishop Falls, Batwood to Notre Dame Bay to the Atlantic.
Creator
Gerrard Connolly
Media Type
Newspaper
Text
Genealogical Resource
Item Types
Articles
Clippings
Notes
This card is part of a larger collection of World War II personnel clippings. The project began in 1944 at the Lindsay Library. The intent was to gather together as much information as possible on the military record and the service of people from the Town of Lindsay and the County of Victoria (now Kawartha Lakes) who served in the war. To that end, during the years 1944, 1945, and 1946, members of the public donated photographs and updated information about their loved ones. Both library staff and the public saved and donated newspaper clippings. Some of the files contain great amounts of detail, while others have just a name.
Publisher
Lindsay Post
Date of Publication
16 Nov 1944
Subject(s)
Canadian History
Fire
Newfoundland
Newfoundland - History
World War II 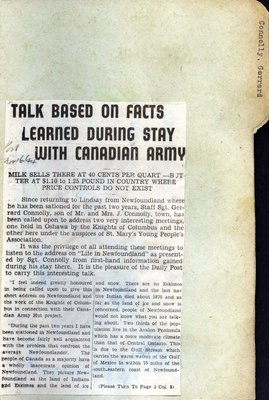