Full Text
May 18, 1943
Congratulations to G. Connolly of Omemee who was among the recent airmen winged at Jarvis.


Headquarters, Canadian Troops
C.A.P.O. No. 1, St. John's Nfld.
13th Feb., 1945.
The wedding took place at 8 o'clock last evening at Little Dale Church, Waterford Bridge Road, of Francis, daughter of Mrs. Mary Hamlyn and the late James Hamlyn, Topsail Road, to S-Sgt. Gerard David Connolly, R.C.A.P.C., son of Mr. and Mrs. John Connolly, Lindsay, Ontario.
The bride was dressed in white satin, princess style, with long pointed sleeves and full length veil and train. The bridal veil was held in place with a crown and she carried a bouquet of red roses and ferns.
The bride was given in marriage by Major General H. N. Ganong, C.B.E., V.D., who accompanied by the bride, inspected the Guard of Honor, which was under the command of Warrant Officer A. P. Greene of Canadian Headquarters. The ceremony was conducted by Rt. Rev. Mgr. J. J. Rawlins, and immediately following the ceremony, Miss Catherine Smyth of this city, sang "Ave Maria". Leaving the church, the bridal party passed under an archway of crossed swords, formed by the Guard of Honour, and proceeded to the Sergeants' Mess, Canadian Headquarters, where the reception was held.
The bridesmaids, Miss Margaret Newgent and Miss Daisy Gough were dressed one in pink and the other in lemon and carried red and yellow tulips with ferns.
The bride and groom left for Avondale on their honeymoon, the bride wearing a Marina blue suit. Their many friends wish them every happiness.
Media Type
Newspaper
Text
Genealogical Resource
Item Types
Weddings
Clippings
Articles
Notes
This card is part of a larger collection of World War II personnel clippings. The project began in 1944 at the Lindsay Library. The intent was to gather together as much information as possible on the military record and the service of people from the Town of Lindsay and the County of Victoria (now Kawartha Lakes) who served in the war. To that end, during the years 1944, 1945, and 1946, members of the public donated photographs and updated information about their loved ones. Both library staff and the public saved and donated newspaper clippings. Some of the files contain great amounts of detail, while others have just a name.
Date of Publication
16 Feb 1945
Subject(s)
Soldiers
Wedding costume
Weddings
World War II
Royal Canadian Army
Royal Canadian Army Pay Corps 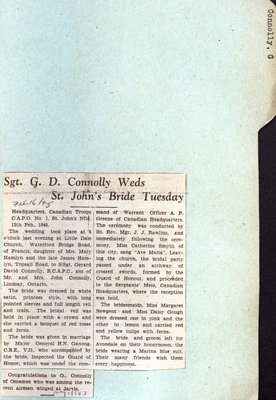