by V.C.G.G. Member Phyllis Cook
With the approach of Armistice Day, I have been asked to provide this rather unusual and somewhat unbelievable account of one of Lindsay's fatalities of World War II, namely Leo Frederick Cook. Leo Cook, was a native of Lindsay, educated at L.C.I and worked locally until joining the Air Force in 1941. He was well known in this area as an avid and extremely talented sportsman. He played both hockey and base/softball with great enthusiasm and ability. He was posthumously nominated to our Lindsay & District Sports Hall of Fame, to our family's delight.

In itself what occurred was not an uncommon happening, but after almost 65 years, certain information has recently been made available, through records received from the Canadian Archives which have presented a totally different perspective on their ill-fated bombing mission over Hanover-Limmer Germany. This story acknowledges the sacrifice of four crew members from the 432 (Leaside) Squadron R.C.A.F., Flight 817. These young men were Pilot Officer Stanley Atkinson, R.C.A.F., Flight Sgt. Navigator Leo F, Cook, R.C.A.F., Pilot Officer Wireless Operator A. W. Chubb, R.A.F., and Flight Sgt. I.C.R. Bowden (second pilot) R.A.F.

The entire crew were not fatalities. Two members survived. Flying Office Wm. Grant (R.C.A.F.) parachuted to safety (breaking his leg in the fall) and Flight Sgt. Shelton Bybee of the U.S. Air Force. These men were interned in Germany, one a British Prisoner of War and the other a U.S. flyer, held captive at the infamous Stalag 17, until hostilities ended and each was repatriated to his own country.

Flight H.E. 817 a Wellington bomber of the 432 Squadron took off from East Moor, near York, on the evening of Sept.27, 1943, on a mission to bomb targets in Hanover, Germany. The aircraft, the only bomber over target, was caught in the search lights from below, spotted by a German fighter, fired upon and seriously damaged on the side, sufficient to cause the pilot to lose control of altitude. The fighter returned to repeat his attack, misjudged the freefall of the bomber, and he crashed into the underside of the Wellington, locked into its exterior and crashed simultaneously with the Wellington. A May Day call was received at East Moor that the flight was in distress and then abandoned. This information together with the foregoing description of the incident, is narrated in a publication called "May Day" written by Joyce Millard, a friend of Pilot Officer Atkinson and other crew members. This narration was provided to the Atkinson family in a letter written by the American crew member, who survived the attack by parachuting out prior to the crash. The letter was sent on to the author, since she was aware of the distress call made, and was making inquiry as to any possible findings following the news of the missing aircraft. Her book was published some years later and included Bybee's letter.

Understandably, due to the status of the war, little information was received by family members. Through the Red Cross, in liaison with German officials, the craft and four crew members were listed as "missing". Several months elapsed (9 to be exact) and on June 6, 1944 "D Day" a notification that they were "presumed dead" was received.

Following the war Flying Officer Grant, the other survivor, visited the families of all casualties. He also told of the final minutes of the incident in a similar fashion as provided by Bybee. His recollection also advised of being taken from hospital to inspect the crash site and he identified the 817 bomber as being that of his crew.

In 1951 relatives were informed that "the crew of Flight 817" had no known graves. The information was in response to an inquiry from Leo Cook's mother, and this brought a final acceptance of the tragedy to family members. No further inquires were made. Early last fall, for personal information only, an application was made to Canadian Archives for Leo's enlistment documentation and any other particulars which were on file, and upon receipt of the information there was included several sheets taken from a British inquiry concerning this particular flight. By process of elimination and facts at hand, the author provided some somewhat unbelievable information.

The bomber had been identified on site; reference to the exact location of the crash; testimony by German citizens who found the crash site; the number of victims; information that the remains of the crew members had been interred at Limmer Civil Cemetery, in four separate graves, description of remains found, interment of remains following the war in Commonwealth Cemetery, 2 graves (common) but four reserved in total

However and for whatever reason this inquiry was discreditied by a second study. No reason for this given. We could conclude that there was no positive way at that time to positively identify the remains, but to-day this might not be the case with scientific progress as it has evolved.

An attempt is being made to obtain documentation which will account for the abandonment of the fust study. We are awaiting a response in this regard.

The British War Graves also have been contacted and here we are also at a stalemate.

As a matter of interest for those in this group, may I say that through efforts of our Chairwoman, Secretary, Library Staff and their investigative sources, information has been uncovered which has put us in contact with the Atkinson family. This was a huge challenge and I must congratulate all who were so helpful. 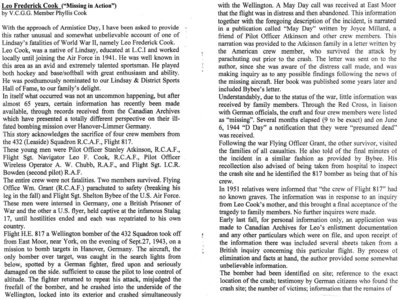