Mr. and Mrs. John Copeland, 135 Durham St. W., town, were recently advised of the death in action in Holland on October 13, of their only son, Pte. Ross Copeland.
A sister of the deceased, Mrs. Elias Liscombe, also of Lindsay, called at the office of The Post this afternoon to show their reporter a copy of a letter that they had received from him and which had been written only the day previous to his death.
In the letter he described the fighting to be hard and that at the moment there was a lull and he was taking advantage of it to write a letter home. He remarked that for several days previous to then, he had not been able to take his shoes off let alone get any rest.
A sad feature of the letter was the fact that he had requested his parents not to send him any Xmas boxes as so far he wasn’t receiving mail very frequently.
The dead serviceman had seen service in France, Belgium and Holland. He enlisted at Vancouver with a signal corps but on his arrival in England last July transferred to an infantry unit, with which he had been serving previous to being killed.
Enclosed in the letter were some souvenir coins which included: a five franc note, a two retenmark note, a two franc piece dated 1943, a ten cent piece dates 1943 Nederlands and a one-cent piece dated 1941 Nederlands.
Surviving the deceased besides his parents are sisters, Dorothy, of Toronto, Mrs. McNicholl, Lindsay and Mrs. A. Liscombe, Woodville.
Friends extend regret at this gallant soldier’s passing, while in the service of his country.
Media Type
Newspaper
Text
Genealogical Resource
Item Types
Death
Correspondence
Articles
Snapshots
Clippings
Notes
This card is part of a larger collection of World War II personnel clippings. The project began in 1944 at the Lindsay Library. The intent was to gather together as much information as possible on the military record and the service of people from the Town of Lindsay and the County of Victoria (now Kawartha Lakes) who served in the war. To that end, during the years 1944, 1945, and 1946, members of the public donated photographs and updated information about their loved ones. Both library staff and the public saved and donated newspaper clippings. Some of the files contain great amounts of detail, while others have just a name.
Date of Publication
10 Nov 1944
Subject(s)
Black Watch of Canada
Correspondence
Death
Royal Canadian Army
Soldiers
War casualties
World War 1939-1945 Honour Roll
World War II 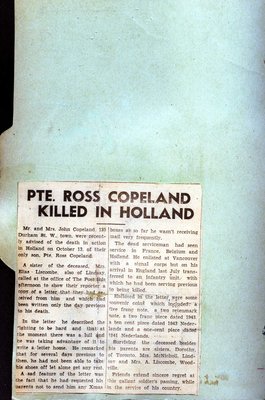