Mrs. Ursula Cresswell, R.N., town, has just received further direct word as to the nature of her son's injuries.
It will be recalled that on Thursday of last week, she was advised that her son, L.-Cpl. Colin, had been injured in a blast while serving in France.
The letter she has just received is from him personally and states that he is now in hospital in England and is suffering from shrapnel wounds to his left shoulder. He writes he is improving satisfactorily and receiving the very best medical attention.
Lindsay and out-of-town friends will be pleased to read this latest information on L.-Cpl. Colin Cresswell’s welfare since being wounded.

Many friends of Colin Cresswell, son of Mrs. Ursula Cresswell, Durham St. W., will be delighted to hear that he has sufficiently recovered from recent injuries that he expects to return to duty.
Colin Cresswell, who is a member of the Provost Company, was on duty when he received shrapnel wounds in the shoulder. According to a letter received by Mrs. Cresswell, her son still carries bits of shrapnel in the shoulder but they will not interfere with his resumption of duty.
The young soldier has been overseas for some time. He has been engaged in the southern part of England and has spent several weeks in a convalescent hospital.
Media Type
Newspaper
Image
Text
Genealogical Resource
Item Types
Snapshots
Articles
Clippings
Photographs
Notes
This card is part of a larger collection of World War II personnel clippings. The project began in 1944 at the Lindsay Library. The intent was to gather together as much information as possible on the military record and the service of people from the Town of Lindsay and the County of Victoria (now Kawartha Lakes) who served in the war. To that end, during the years 1944, 1945, and 1946, members of the public donated photographs and updated information about their loved ones. Both library staff and the public saved and donated newspaper clippings. Some of the files contain great amounts of detail, while others have just a name.
Publisher
Lindsay Post
Date of Publication
29 Aug 1944
Subject(s)
8th Provost Company
Canadian Provost Corps
Military personnel
Military service
Recruiting & enlistment
Soldiers
Soldiers -- Wounds and injuries
War casualties
World War II 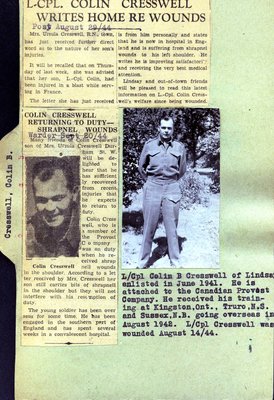