Full Text
No date [August 1944]
L.-Cpl. Cresswell
L.-Cpl. B. Colin Cresswell, 137 Durham Street, Lindsay, has been wounded in France. L.-Cpl. Cresswell enlisted in Kingston in June 1943, and went overseas in August of the same year. He is a graduate of the Lindsay Collegiate Institute and was prominent in athletics.

Mrs. Ursula Cresswell, 137 Durham St. W., telephoned The Post at noon to-day (Thursday) to say that her only son, Lance Corporal Colin Cresswell, has officially been reported injured while on active service in France.
Mrs. Cresswell read the telegram she had received from the Director of Records, Ottawa, over the telephone and it stated in effect, "that her son, L-Cpl. Colin Cresswell had been injured while on active service by blast. Extent of injuries not known."
L.-Cpl. Cresswell enlisted with the Canadian Provost Corps in June, 1941 at Kingston, Ont., and went overseas in August of the following year. While in Canada he trained with his unit at Debert and Sussex.
At the time he received his injuries he was an active duty with the 8th Canadian Provost Corps in France.
Colin's father was the late William B. (Ford) Cresswell of Lindsay.


August 30, 1944
L. CORP. C. CRESSWELL IS WOUNDED
Member of Provost Company Serving in France—Was Member of L C.I. Rugby Team.
Mrs. Ford Cresswell, 137 Durham St., was notified to-day that her son Lance Corp. Blanford Colin Cresswell, has been wounded "in a blast" in France. The wounds took place on Aug. 14th. Lance Corporal Cresswell, who was born and raised in Lindsay, joined the Provost Company in Kingston in June 1943 and was attached for some time to the 8th Provost Company. He received further training at Debert, N.S. and at Sussex N.B. going overseas in August '43. He is a graduate of the Lindsay Collegiate Institute and was prominent in athletics, especially rugby. He was a member of St. Andrew's church bible class.
Lance Cpl. Cresswell for some years past has been making his home with his mother and with his grandfather Mr. James Bell.
Media Type
Newspaper
Image
Text
Genealogical Resource
Item Types
Snapshots
Photographs
Articles
Clippings
Notes
This card is part of a larger collection of World War II personnel clippings. The project began in 1944 at the Lindsay Library. The intent was to gather together as much information as possible on the military record and the service of people from the Town of Lindsay and the County of Victoria (now Kawartha Lakes) who served in the war. To that end, during the years 1944, 1945, and 1946, members of the public donated photographs and updated information about their loved ones. Both library staff and the public saved and donated newspaper clippings. Some of the files contain great amounts of detail, while others have just a name.
Publisher
Watchful Warder
Date of Publication
30 Aug 1944
Subject(s)
8th Provost Company
Canadian Provost Corps
Military personnel
Military service
Recruiting & enlistment
Soldiers
Soldiers -- Wounds and injuries
War casualties
World War II 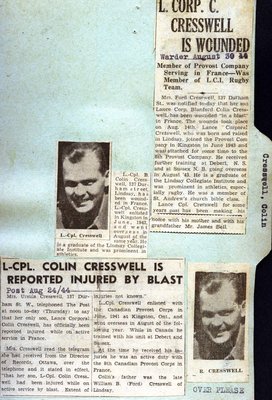