Full Text
May 23, 1943
Pte. W. Crarey stationed at Niagara Falls, spent the weekend with his wife and parents in Haliburton.


August 3, 1943
Pte. W. Crarey of Woodstock spent the weekend with his wife and daughter in Haliburton.


December 29, 1943
Cpl. Wilfred Crarey of Halifax spent the weekend holidays with his wife and little daughter.


June 22, 1944
Pte. Wilfred Crarey stationed at Debert has been in a hospital suffering from a strained muscle in his leg. His wife and daughter Beth live in Haliburton.


September 12, 1944
Mrs. Wilfred Crarey has received word from her husband, who is now stationed in Great Britain. He has been in the R.C.A.S.C. for two years and was stationed for some time on the east coast.


February 16, 1946
Mr. Wilfred Creary [Crarey] has returned to the village after receiving his discharge from the Services.
Media Type
Newspaper
Image
Text
Genealogical Resource
Item Types
Snapshots
Clippings
Notes
This card is part of a larger collection of World War II personnel clippings. The project began in 1944 at the Lindsay Library. The intent was to gather together as much information as possible on the military record and the service of people from the Town of Lindsay and the County of Victoria (now Kawartha Lakes) who served in the war. To that end, during the years 1944, 1945, and 1946, members of the public donated photographs and updated information about their loved ones. Both library staff and the public saved and donated newspaper clippings. Some of the files contain great amounts of detail, while others have just a name.
Date of Publication
23 May 1943
Subject(s)
Furloughs
Military service
Recruiting & enlistment
Royal Canadian Army
Royal Canadian Army Service Corps
Winnipeg Grenadiers (C company) 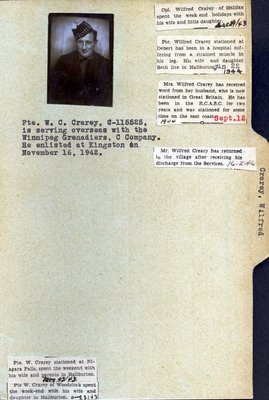