Full Text
October 30, 1944
BEAVERTON SOLDIER, PREVIOUSLY REPORTED MISSING NOW LISTED KILLED IN ACTION
Beaverton, Oct. 30—Sgt. Charles McKenzie Cro, aged 25, who was previously reported missing in action in France, Sept. 8th, has been officially reported killed in action on that same day. He was born in Meleta, Man., and received his high school education there. He was the only child of Mrs. Georgina Cro and the late Charles Cro. After the death of his father six years ago he and his mother came to Beaverton to reside with Mrs. Cro's father at Cedar Beach.
Prior to his enlistment in March 1940, he was an employee of the Loblaw Co., Toronto. He served with the Rocky Mountain Rangers and went with the troops that invaded Kiska. He went overseas in May of this year. In England he was transferred to the Calgary Highlanders, going to France in June.
Media Type
Newspaper
Text
Genealogical Resource
Item Types
Death
Articles
Clippings
Description
Died on 08 September 1944.
Notes
This card is part of a larger collection of World War II personnel clippings. The project began in 1944 at the Lindsay Library. The intent was to gather together as much information as possible on the military record and the service of people from the Town of Lindsay and the County of Victoria (now Kawartha Lakes) who served in the war. To that end, during the years 1944, 1945, and 1946, members of the public donated photographs and updated information about their loved ones. Both library staff and the public saved and donated newspaper clippings. Some of the files contain great amounts of detail, while others have just a name.
Date of Publication
30 Oct 1944
Date Of Event
8 Sep 1944
Subject(s)
Death
Military service
Soldiers
War casualties
World War II
Royal Canadian Army
World War 1939-1945 Honour Roll
Royal Canadian Infantry Corps
Calgary Highlanders, RCIC 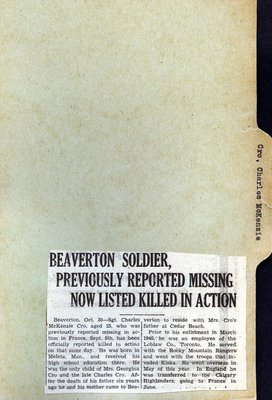