Full Text
July 29, 1942
Toronto, July 29. — Red Cross parcels are being received in good order by Canadian prisoners of war, and the contents of the parcels are of substantial benefit to prisoners' health. So reads a letter from Captain Wilfred R. Crowe to the Toronto Red Cross branch and just received, by the secretary.
Captain Crowe, formerly of Orangeville, was a graduate in medicine from Queen's University, and was captured July 1 in Crete while serving with the Royal Army Medical Corps. Before enlisting, he practiced medicine at Minden.
"Canadian parcels with their B1 content are particularly valuable," wrote Captain Crowe, "and I would like to congratulate you on the choice of foodstuffs. Canadian Red Cross parcels compare most favourably with those from other parts of the Empire."
Dr. Crowe is widely known in this district having been located at Minden for several years. Mrs. Crowe has been in England for over two years and is one of the officials at Canada House. Dr. Crowe is a veteran of the last Great War.


September 5, 1945
DR. W. R. CROWE
Dr. W. R. Crowe, M.D., C.M., who practiced in Minden for some years, and who has recently returned from overseas has purchased the residence and office at 228 Kent St. West, from Dr. M. E. Gorman and will open his office on Monday, September 10th.


No date [September 1945]
Dr. Crowe Is Speaker At Rotary
Dr. W. R. Crowe, who has recently returned from a German prisoner of war camp was the special speaker at the Rotary Club luncheon in the Hotel Benson to-day.
Dr. Crowe, who formerly practised at Minden, has now located in Lindsay where both he and Mrs. Crowe have been most cordially welcomed.
Media Type
Newspaper
Text
Genealogical Resource
Item Types
Clippings
Articles
Notes
This card is part of a larger collection of World War II personnel clippings. The project began in 1944 at the Lindsay Library. The intent was to gather together as much information as possible on the military record and the service of people from the Town of Lindsay and the County of Victoria (now Kawartha Lakes) who served in the war. To that end, during the years 1944, 1945, and 1946, members of the public donated photographs and updated information about their loved ones. Both library staff and the public saved and donated newspaper clippings. Some of the files contain great amounts of detail, while others have just a name.
Date of Publication
29 Jul 1942
Subject(s)
Battle of Crete
Beaver Lodge (London, UK)
Campaigns & battles
Canadian Red Cross
Physicians
Royal Army Medical Corps (RAMC)
Soldiers
Veterans
World War II 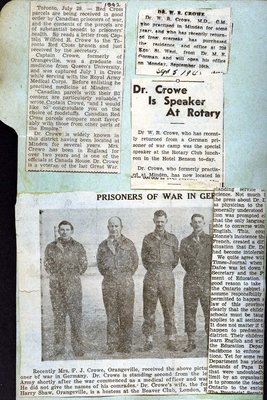