WITH RCAF BOMBER GROUP, OVERSEAS— Attacked by three German fighters at one minute intervals, a Toronto and a Lindsay gunnery combination shot down one and escaped unscathed from the other two.
The gunners, Sgt. Jimmy Main, of Toronto (322 Kenilworth Ave.) and Sgt. Roy Cunningham, of Lindsay, Ont., (54 Albert St.) were keeping a sharp watch for fighters on the way back from Bremen when an Me109 broke out of the clouds and started firing. It was the last move the German made. Main and Cunningham both registered hits and the fighter went twisting crazily to earth, wreathed in a cloud of smoke.
The lads had hardly time to exult over the killing when an unidentified fighter swooped in from above. There was one rapid exchange of fire and the Jerry got out in a hurry. A minute later an Me109 attacked and again after a brief flurry of fire cupled [coupled] with sharp evasive action, the Canadian crew continued on their way undamaged.
Former football star with Eastern Commerce in Toronto, 22-year-old Sgt. Main was on his thirteenth trip. From now on, that's his lucky number.

In conversation with Mr. Fred Cunningham, 54 Albert St. S., Town, it is learned that he and Mrs. Cunningham are expecting the arrival of their son, P.O.S.R. Cunningham (A/G), in Lindsay at any hour.
P/O Cunningham wired his parents immediately upon his arrival in the Dominion from overseas and while he was unable to give them any definite time as to when they might expect him to complete the trip home did intimate that it would be soon.
He has been overseas approximately one year, during which time he completed his tour of operations and received his promotion from flight-sergeant to pilot officer.
He reports completing the tour of operations without injury to himself.
Media Type
Newspaper
Text
Genealogical Resource
Item Types
Articles
Clippings
Notes
This card is part of a larger collection of World War II personnel clippings. The project began in 1944 at the Lindsay Library. The intent was to gather together as much information as possible on the military record and the service of people from the Town of Lindsay and the County of Victoria (now Kawartha Lakes) who served in the war. To that end, during the years 1944, 1945, and 1946, members of the public donated photographs and updated information about their loved ones. Both library staff and the public saved and donated newspaper clippings. Some of the files contain great amounts of detail, while others have just a name.
Subject(s)
Campaigns & battles
Fighter pilots
Fighter planes
Military air pilots
Royal Canadian Air Force
Soldiers
World War II 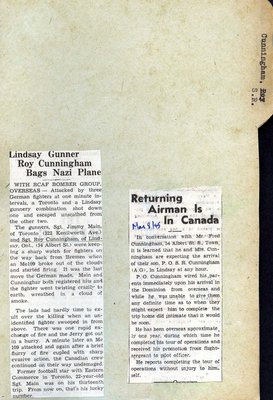