Full Text
February 24, 1945
Cpl. Betty Davies of Town Praises Girl Guide Training
Former L.C.I. Girl now with C.W.A.C.
Kingston, Feb. 24—Officers and other ranks of the Canadian Women's Army Corps in Military District No. 3 who were once members of the Canadian Girl Guide Association agree that the association provides a valuable background for a girl when she enlists with the C.W.A.C.
An officer of the C.W.A.C., who was formerly a Girl Guide is Major M. Pearl Brent, Officer Commanding No. 103 Depot Company, Kingston. She was a lieutenant in a Moose Jaw, Sask., Guide company. Lt. Christine Boyd, of Glasgow, Scotland, educational officer of No. 7 Administrative Unit, Barriefield, joined the Scottish Girl Guides as a Tenderfoot, and rose to be district captain in her home city, qualifying as a first-class Guide and all round cords. Lt. Sidney Stevenson, of Toronto, officer in charge of the C.W.A.C. at Fort Frontenac, was a member of a Cadet Ranger Company in Hampstead, London, England.
Among other ranks of the Kingston district who are former Girl Guides is S/Sgt. Romaine Millard, of Port Hope, who is in charge of the Night Vision Testing Department at Fort Frontenac. S/Sgt. Millard was a member of the Port Hope Central School Company led by Miss Catherine Baines and Mrs. Marjorie Gettys.
Now a member of the staff of the Supply and Transport Office for Military District No. 3, Pte. Doris Whithard of Nalartic, Que., and Toronto, was formerly a lieutenant of No. 31 Company Girl Guides at Bishop Strachan School, Toronto. Also a former Toronto Guide, of the Queen Alexander School Company under Miss Mollie Christie, is Pte. Marion Slugg, who is a graduate of the Eastern High School of Commerce, Toronto. She is now serving as pay clerk at Fort Frontenac.
Cpl. Betty Davies, another pay clerk at Fort Frontenace [sic], was a former patrol leader of No. 4 Company, Lindsay, and a "Tawnyowl” in a Lindsay Brownie Pack. She attended Lindsay Collegiate Institute. A member of the orderly room staff of No. 7 Administrative Unit, C.W.A.C., Barriefield Camp. Pte. June Brewer was once a Girl Guide in the St. Peter's Parish Company, Peterborough, led by Mrs. Elizabeth Whalen.
Media Type
Newspaper
Text
Genealogical Resource
Item Types
Articles
Clippings
Notes
This card is part of a larger collection of World War II personnel clippings. The project began in 1944 at the Lindsay Library. The intent was to gather together as much information as possible on the military record and the service of people from the Town of Lindsay and the County of Victoria (now Kawartha Lakes) who served in the war. To that end, during the years 1944, 1945, and 1946, members of the public donated photographs and updated information about their loved ones. Both library staff and the public saved and donated newspaper clippings. Some of the files contain great amounts of detail, while others have just a name.

In some articles, the last name is spelled Davies, others Davis. 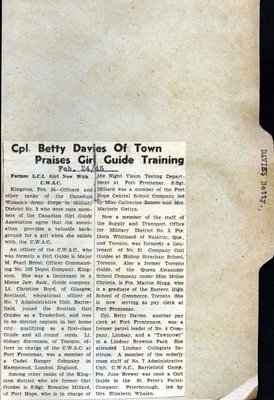