Full Text
August 29, 1944
Pte. R. Dawson of Haliburton Dies in France
Haliburton, Aug. 28 (PNS)—Haliburton friends and residents were shocked to learn that Pte. Richard Dawson, well-known soldier from this district, has been killed while on active service in France.
‘Dick’ as he was more familiarly known, was a cook for the C. W. Hodgson Lumber Co., previous to his enlistment.
Pte. Dawson’s parents live at Maple Lake, and two other brothers are in the services. One is attached to the R.C.A.F. and the other to the R.C.N.

Haliburton, Sept. 12—Mr. and Mrs. Dawson of Maple Lake have received word of the death of their son, Richard Harold Dawson, while serving with his regiment overseas. The telegram stated that he had been killed but gave no further details.
Prior to his enlistment he worked for C. W. Hodgson for many years in the pursuit of his trade of cook.
The sympathy of the community is with the family in their hour of trouble.

A memorial service was held in St. Peter’s Anglican Church Maple Lake on Oct. 15 for Pte. Richard Dawson, son of Mr. and Mrs. Milton Dawson, who paid the supreme sacrifice for his country in France. A former rector Chaplain Capt. W. I. D. Smith of Peterboro, conducted the service. Pte. Dawson had been confirmed under Rev. Mr. Smith and it was fitting that he was present for this memorial service.
Media Type
Newspaper
Text
Genealogical Resource
Item Types
Articles
Death
Clippings
Notes
This card is part of a larger collection of World War II personnel clippings. The project began in 1944 at the Lindsay Library. The intent was to gather together as much information as possible on the military record and the service of people from the Town of Lindsay and the County of Victoria (now Kawartha Lakes) who served in the war. To that end, during the years 1944, 1945, and 1946, members of the public donated photographs and updated information about their loved ones. Both library staff and the public saved and donated newspaper clippings. Some of the files contain great amounts of detail, while others have just a name.
Publisher
Lindsay Post
Date of Publication
29 Aug 1944
Date Of Event
25 Jul 1944
Subject(s)
Death
Recruiting & enlistment
War casualties
World War II
Royal Canadian Army
World War 1939-1945 Honour Roll
Black Watch of Canada 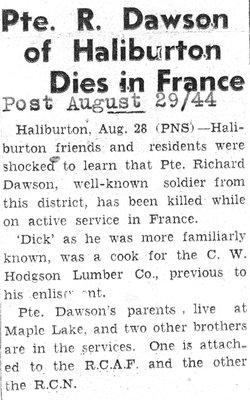