Mr. C. Deck, King St., submitted a request to the Town Council that instead of paying a transient trader’s license of $100 for opening a grocery store at the corner of St. Peter and King St., that he be allowed to pay taxes a year in advance.
Council took a lenient view of the suggestion, as Mr. Deck has just recently been discharged from the Navy.
On motion of Ald. Pitts it was decided not to collect the Transient Trader’s license.

One of the first, if not the first, of Lindsay's young returned men, who has gone further than to contemplate setting up in business is Colin Deck. Deck, who cannot yet, according to the Navy, be called Mister (he has not received his discharge from the Service), opened a grocery store, Nov. 15, in the premises formerly occupied by H. Staples, 86 King St.
"I served two years with the Supply Branch of the R.C.N.V.R., one of which was spent at sea, aboard the frigate H.M.C.S. Runnymede," Colin Deck disclosed this morning, adding, "This experience will greatly assist me in the management if a grocery store business."

"On Tuesday next," Deck states, "I go for my discharge from the R.C.N.V.R., from which I have been absent on an extended leave."

He recently submitted a request to the Town Council, that, instead of paying a transient trader's license of $100 to start a grocery business, he pays a year's taxes in advance. Since he is a returned man Council decided not to collect the fee for a trader's license and to issue him a business license next year for which he will be charged in the usual way.

Media Type
Newspaper
Text
Genealogical Resource
Item Types
Articles
Clippings
Notes
This card is part of a larger collection of World War II personnel clippings. The project began in 1944 at the Lindsay Library. The intent was to gather together as much information as possible on the military record and the service of people from the Town of Lindsay and the County of Victoria (now Kawartha Lakes) who served in the war. To that end, during the years 1944, 1945, and 1946, members of the public donated photographs and updated information about their loved ones. Both library staff and the public saved and donated newspaper clippings. Some of the files contain great amounts of detail, while others have just a name.
Date of Publication
14 Nov 1945
Subject(s)
Business people
Grocery stores
Veterans
Veterans -- Employment 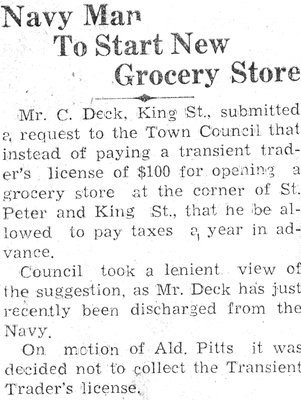