It is with regret that I refer to the loss of your son, Pilot Officer James Frederick Devitt, but a report has been received from our Missing Research and Enquiry Service concerning your son and the members of his crew.

Investigating Officers of this Service on visiting the cemetery at Beirsdorf, located the graves of your son and his three crew mates who lost their lives in the crash. Beirsdorf is approximately 17 miles from the Belgium border in Western Germany.

This British Military Cemetery will be reverently cared lor and maintained in perpetuity by the Imperial War Graves Commission (of which Canada is a member). The Commission will also erect a permanent headstone at your son's resting place.

It is my earnest hope that you will be comforted with the knowledge that your son's resting place is known and that it will be permanently maintained, and I would like to take this the members of your family my deepest sympathy in the loss of your gallant son. 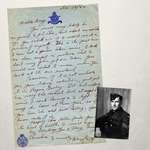