Full Text
January 1946
RE-UNITED BY PHONE, ARCHER FAMILY TALK TO SON IN U.K.
Since December 28, Mr. and Mrs. Atkin Archer, 122 Adelaide Street South, have hardly dared to leave their house or to stray far from the telephone. Dec. 28 was the day on which they booked a telephone call to their son Gunner C. A. Archer, who is serving with the Canadian Army in England. The family were all gathered on that auspicious day, but owing to wire trouble somewhere along the circuits, the call could not be placed.
However, the Bell Telephone Company, like the R.C.M.P., finally get their man. Every day since Dec. 28 they tried to connect Mr. and Mrs. Archer in Lindsay with Gnr. Archer in Dover, Kent. On one day, the circuit was completed, only to find that Gnr. Archer, a driver, was away on a trip and could not be brought to the phone. On another day, the soldier son was at the phone but through some difficulty the circuit could not be completed. And so it went every day until last Thursday, January 10. On that day Gnr. Archer was at the phone in England, Mrs. Archer was at the phone in Lindsay and everything went through without a hitch.
"It was a great thrill," Mrs. Archer told the Warder. "We could hear our son as though he were calling from another phone in Lindsay, and he told us he could hear all our voices just as clearly."
Mr. and Mrs. Archer were not the only ones to take part in the conversation. There were also their two sons, Robert and Clebourne and their daughter, Ruth.
The family was not quite re-united, however, for a younger brother and sister had just left for school when the phone connection was made, and thus missed talking to their big brother across the ocean.
Their thrill will come in March when Gnr. C. A. Archer expects to be home in Canada. He told his mother he had just been posted from No. 2 Canadian Transit Camp at Connaught Barracks, Dover to Aldershot, and as most Canadian soldiers know, Aldershot is the stepping-off place for the boat which brings them from Blighty to Canada.
Media Type
Newspaper
Text
Item Types
Articles
Clippings
Date of Publication
Jan 1946
Subject(s)
Bell Canada
Military life
Royal Canadian Army
Soldiers
Soldiers' homes
World War II 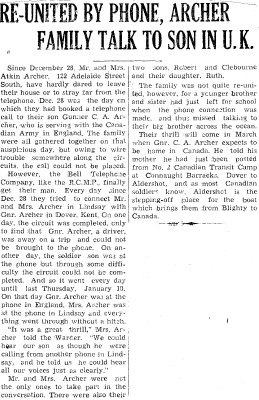