Full Text
May 12, 1945
LAC LLOYD ATCHISON FIGURES IN DARING RESCUE IN LABRADOR
A well-known Lindsay airman, LAC Lloyd Atchinson, figured in the daring rescue of seven Canadian airmen who were stranded for 13 days in the Labrador wilds when their Canso flying boat crashed 150 miles from Goose Bay, famous R.C.A.F. Labrador base.
The tiny, collapsible helicopter made seven landings, one for each man, to effect the rescue, which could not be made by ordinary aircraft, the U.S. Coast Guard said Thursday. Two R.C.A.F. rescue planes and their crews were stranded for a week after they landed, being unable to take off.
Sregt.n [sic] G. J. Bunnell, and P.O. G. E. Joy, both of Toronto, were among those rescued. P.O. Bert Lahey, Port McNichol, captain of the crashed plane, and W. R. Baggett Edmonton, both badly burned in an explosion which followed the crash, had been flown out earlier by a Norseman aircraft.
The helicopter was tucked into a C54 Skymaster of the U.S. Air Transport Command and flown up to Goose Bay from Floyd Bennett Field, New York. It flew from there to the scene of the crash under its own power.
The stranded airmen sent up a mighty cheer when a U.S. Coast Guard pilot, Lieut. August Kleisch, stepped out of the craft, alternately nick-named the "eggbeater", the "flutter buggy" and the "upside down windmill".
The helicopter's arrival put an end to fears that they would have to wait at least a month until pontoon-equipped aircraft could land. "We were at a 2,000-foot altitude at ground level and the helicopter had never taken off at that height before," Kleisch said. "I had to make jump take-offs."
Kleisch flew out Bunnell first in the late afternoon on May 1, 12 days after the Canso crashed. The next morning the helicopter's engine froze and a heater was flown in from Goose Bay to defrost it. The final rescues were made that afternoon.
RCAF. and U.S. ATC. planes dropped the airmen everything they needed, including a message that a helicopter was on the way. "All we had to do was ask for something and we got it," P.O. Robert Sugden, 22, of Oshawa, wrote home later.
Not a man was injured when the Canso pancaked into the branches of a spruce tree, but while the crew was taking out emergency supplies it exploded, seriously injuring Lahey and Baggett. The others built a lean-to of boughs and parachute cloth to provide shelter for them. They decided to ration their meager food supply at a rate of one chocolate bar and four small biscuits a day.
On the third day, three of the men struck out for Goose Bay through the deep snow believing it to be only 90 miles away. P.O. A. C. Smith, Vancouver, noted in his diary: "Sent three men to hike to Goose Bay. They carried rations for four days. God help them and us if they don't make it."
On the first day out, they sighted two C54's of the A.T.C. and built a smudge fire to attract their attention. One dropped food, parkas, blankets and other badly needed supplies and equipment.
Two Norsemen aircraft took off from Goose Bay and one succeeded in landing a mile away. Carrying stretchers through almost impassable snow, the crew, which included L.A.C. Lloyd Atchison, of Lindsay, reached the wreck. The two injured men were flown out that night.
The second Norseman crashed into trees at the end of a lake while taking off. The Norseman which made the original rescue landed again, but because the snow had turned slushy could not take off again.
Makeshift runways were built by laying hundreds of poles in the snow and after a week the two Norsemen were able to take off with their crews.
The other members of the crew were F.O. D.L. Munro, Vancouver; P.O. E.W. Lambert, Lingle, Wyoming, and W.R. Taillefer, Pemberton, B.C.
Media Type
Newspaper
Text
Genealogical Resource
Item Types
Clippings
Articles
Notes
This card is part of a larger collection of World War II personnel clippings. The project began in 1944 at the Lindsay Library. The intent was to gather together as much information as possible on the military record and the service of people from the Town of Lindsay and the County of Victoria (now Kawartha Lakes)who served in the war. To that end, during the years 1944, 1945, and 1946, members of the public donated photographs and updated information about their loved ones. Both library staff and the public saved and donated newspaper clippings. Some of the files contain great amounts of detail, while others have just a name.
Date of Publication
12 May 1945
Subject(s)
Military air pilots
Rescues
Royal Canadian Air Force
Search & rescue operations
Soldiers
Soldiers -- Wounds and injuries
U.S. Coast Guard
World War II 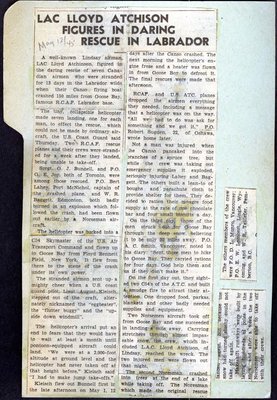