Media Type
Image
Item Type
Photographs
Description
Photograph shows Dr. George C.R. Hall's 1925 Snow Car. Dr. George C.R. Hall’s snow car, was a 1925 Ford truck, with skis on the front and wheels covered with chains on the back, allowing the doctor to travel over the snow drifts. A digital copy of this photo was provided by Marylou Hall as part of a presentation on her family.

Notes
The snow car did have a heater. During the summer months the snow car was converted back to a regular Ford truck.

During the winter, Dr. George C.R. Hall made his house calls in the snow car, which was a prototype to the snowmobile. Before the snow car, both father and son made their rounds on snow shoes; these were men whose hearts were into their work.

The snow car was a Ford Truck with skis on the front and wheels covered with chains, allowing the doctor to visit his patients.

Dr. Hall promised his wife the snow car would never tip over, but it did with her in it. 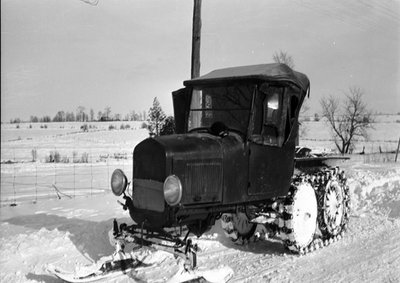