Media Type
Image
Item Type
Photographs
Description
Dr. and Mrs. George C.R. Hall in New York in the 1950s. A digital copy of this photo was provided by Marylou Hall as part of a presentation on her family.
Notes
Technology continued to play a key role in Dr. George C.R. Hall’s life. His interest continued with the ham radio, but was broadened with the introduction of the television. The Hall family had the first TV set in Little Britain. The first time the Canadian Broadcasting Corporation came on the air, their test pattern was upside down. The CBC showed the Grey Cup, but lost its picture at half time. 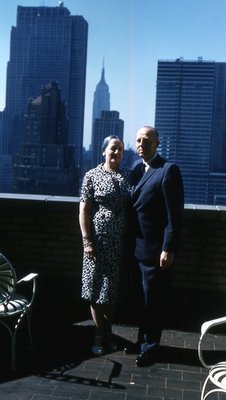