Lindsay was well represented at a memorial service held in Holland recently for Dutch soldiers who fell in 1940 during their heroic effort to stem the Nazi onslaught.
This information is contained in a letter just received from L. Bdr. Cyril Ainsworth, son of Mr. and Mrs. Hugh Ainsworth, Lindsay, who is at present stationed in Holland.
He writes that he was a member of a firing party which was in charge of Sgt. Gordon Mayes, also of Lindsay, which fired the salute of honor during the service.
L. Bdr. Ainsworth was for several years prior to the war a pressman with The Lindsay Daily Post and not long ago he had an opportunity to get his hand in again at his old trade. This time it was on the printing of his unit's news bulletin, the "S. P." The paper derives its name from the type of armour it employs - self-propelled field artillery and it is printed at Lochem, Holland. A six-page tabloid style journal it is printed on glossy stock and it is complete with editorial, sports and general news columns all of special interest to the unit. A weekly publication, it is made possible through the kind permission of the Commanding Officer, Lt.-Col. R.E. Hogarth. "SP" is produced entirely by members of the 23rd Canadian Field Regt. (S.P.) R C A., in the printing offices of J. H. Scheen, Lochem.
Feature news picture of the August 25. edition was a reproduction of a plaque presented to the 23rd Field Regiment by the units of the 4th Armoured Brigade, in recognition of support given to them during the European campaign.
Enclosed in the letter were three very interesting snapshots taken in Holland. One was a street scene in a Dutch town during the celebrations held in honor of Queen Wihelmina's 65th Birthday last Sept. 1 - another was a very old and quaint church in Goor, and still another was of a family gathering in a typical Dutch farm home. The latter was taken by the writer in the dining room of the home and being a time exposure he was able to get in the group picture.
Media Type
Newspaper
Text
Genealogical Resource
Item Types
Clippings
Articles
Notes
This card is part of a larger collection of World War II personnel clippings. The project began in 1944 at the Lindsay Library. The intent was to gather together as much information as possible on the military record and the service of people from the Town of Lindsay and the County of Victoria (now Kawartha Lakes)who served in the war. To that end, during the years 1944, 1945, and 1946, members of the public donated photographs and updated information about their loved ones. Both library staff and the public saved and donated newspaper clippings. Some of the files contain great amounts of detail, while others have just a name.
Date of Publication
17 Sep 1945
Date Of Event
1940
Subject(s)
Memorial rites & ceremonies
World War Two, 1939-1945 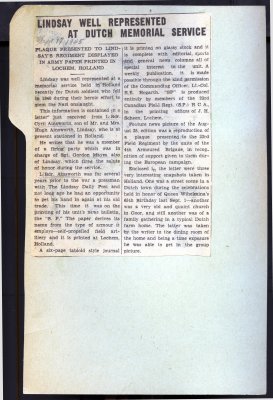