Mr. and Mrs. Hugh Ainsworth, 55 Melbourne St. W., have received word from their son, Gnr. Ronald Ainsworth, to the effect that he is now serving in Normandy.
Gnr. Ainsworth joined the services at the beginning of the war, enlisting in the 45th Field Battery, R.C.A., in Lindsay and went overseas shortly afterward. He has been stationed in England from the time of his arrival there, until he recently went to France.
Enclosed in the letter which his parents received was a French Five-Franc note sent as a souvenir of that country and it was interesting to compare the size of their paper money with that of ours.
Gnr. Ainsworth stated in his letter that he was quite happy and that he was enjoying the expedition to the fullest extent. He expressed surprise at what the country was like and said that it was different entirely from what he and the others had anticipated.
In closing Ronald told his parents not to worry about his safety and said he had no intention of "catching a quick one".
Good luck and safe return is the wish of his many friends in Lindsay and district.

Oct. 4, 1944
The box of chocolates has been received by me with thanks.
Gnr. R. Ainsworth
Media Type
Newspaper
Image
Text
Genealogical Resource
Item Types
Clippings
Articles
Notes
This card is part of a larger collection of World War II personnel clippings. The project began in 1944 at the Lindsay Library. The intent was to gather together as much information as possible on the military record and the service of people from the Town of Lindsay and the County of Victoria (now Kawartha Lakes)who served in the war. To that end, during the years 1944, 1945, and 1946, members of the public donated photographs and updated information about their loved ones. Both library staff and the public saved and donated newspaper clippings. Some of the files contain great amounts of detail, while others have just a name.
Date of Publication
4 Oct 1944
Date Of Event
Fall 1939
Subject(s)
World War Two, 1939-1945
RCA
Royal Regiment of Canadian Artillery 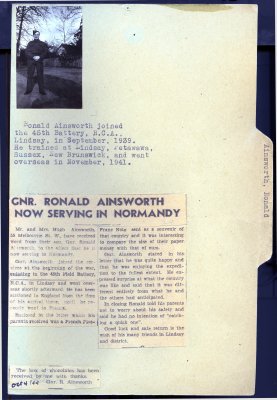