Full Text
No date.
Gilbert Anderson, a young soldier from Dorset has been slightly wounded, according to information received by his mother, Mrs. Arthur B. Anderson. He saw active service with a Western Ontario Regiment.

July 14, 1944
Pte. Anderson Dorset Soldier Army Casualty
The many Dorset friends of Pte. Gilbert Oswald Anderson will regret to learn that he has been slightly injured according to official word reaching his mother, Mrs. Annie B. Anderson of that village.
Pte. Anderson was on active service with the Western Ontario Regiment at the time he met with his accident.
Further details will be published as they are received.
Media Type
Text
Genealogical Resource
Newspaper
Item Type
Clippings
Notes
This card is part of a larger collection of World War II personnel clippings. The project began in 1944 at the Lindsay Library. The intent was to gather together as much information as possible on the military record and the service of people from the Town of Lindsay and the County of Victoria (now Kawartha Lakes)who served in the war. To that end, during the years 1944, 1945, and 1946, members of the public donated photographs and updated information about their loved ones. Both library staff and the public saved and donated newspaper clippings. Some of the files contain great amounts of detail, while others have just a name.
Date of Publication
14 1944
Subject(s)
World War Two, 1939-1945
Personal Name(s)
Anderson, Gilbert Oswald ; Anderson, Arthur B. ; Anderson, Annie B.
Language of Item
English
Geographic Coverage
Copyright Statement
Copyright status unknown. Responsibility for determining the copyright status and any use rests exclusively with the user.
Copyright Holder
Kawartha Lakes Public Library
Location of Original
Kawartha Lakes Public Library - Archives
Contact
Kawartha Lakes Public Library
Email
WWW address
http://www.kawarthalakeslibrary.ca
Agency street/mail address
190 Kent St W.
Lindsay, ON K9V 2Y6
(705) 324-5632 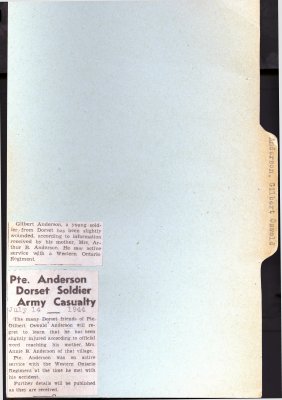