Full Text
September 5, 1945
NEW MANAGER IN CHARGE OF HOTEL BENSON
H. C. Annable, D.F.M., of Lindsay, Has Had Practical Experience - Hotel Being Re-decorated.
Citizens of Lindsay, but more especially the travelling public, will be interested in learning that Mr. H. C. Annable, of Lindsay, has suceeded Mr. V. Egan as manager of the Hotel Benson and has already assumed his duties.
Mr. Annable comes to the Hotel Benson highly recommended. Although he is not a native son of Lindsay, he married a young Lindsay girl and has been a resident of town for several years. Previous to the war Mr. Annable was associated with the Hotel Benson, first as a bell boy, then as a desk clerk, and for six years he has been actively identified with Lindsay's largest hostelry.
He served with the R.C.A.F. for three years, completed his tour of operations and was honoured with the decoration of D.F.M. He has many friends, all of whom will join in wishing him every success in his new venture.
Mr. Egan, it is understood, has retired from business owing to ill health.
Media Type
Text
Genealogical Resource
Newspaper
Item Type
Clippings
Notes
This card is part of a larger collection of World War II personnel clippings. The project began in 1944 at the Lindsay Library. The intent was to gather together as much information as possible on the military record and the service of people from the Town of Lindsay and the County of Victoria (now Kawartha Lakes)who served in the war. To that end, during the years 1944, 1945, and 1946, members of the public donated photographs and updated information about their loved ones. Both library staff and the public saved and donated newspaper clippings. Some of the files contain great amounts of detail, while others have just a name.
Date of Publication
5 Sep 1945
Subject(s)
RCAF
World War Two, 1939-1945 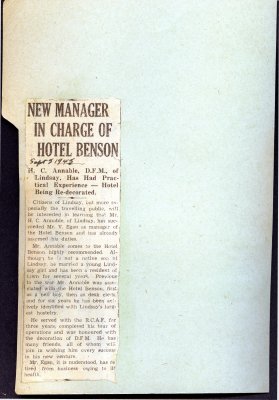