Full Text
July 26 (No year)
Pte. C. Armstrong Injured Overseas
Omemee, July 26 (Staff) - Word has been received by Mrs. Cecil Armstrong, nee Dorothy Ellis, daughter of Mr. and Mrs. W. Ellis, Omemee, that her husband, Pte. Cecil Armstrong, R.C.O.C. has been injured in a motorcycle accident in England. On Friday Mrs. Armstrong received a letter from her husband advising her of the extent of his injuries. He is suffering from a compound fracture of the right leg and severe side lacerations and his right arm is injured causing temporary paralysis.
Pte. Armstrong enlisted in the Royal Canadian Ordinance Corps in September 1941, and landed in England on June 18th, 1942. His wife and little son Jimmie, reside in Omemee with Mrs. Armstrong's parents Mr. and Mrs. W. Ellis. Jimmie was born after his father left Canada.
Mr. and Mrs. Ellis also have two sons serving in His Majesty's forces LAC David Ellis, who is at present with the RAF in France and Tpr. Harry Ellis RECCE who is stationed at Dundurn, Sask.
Media Type
Text
Image
Genealogical Resource
Newspaper
Item Type
Clippings
Notes
This card is part of a larger collection of World War II personnel clippings. The project began in 1944 at the Lindsay Library. The intent was to gather together as much information as possible on the military record and the service of people from the Town of Lindsay and the County of Victoria (now Kawartha Lakes)who served in the war. To that end, during the years 1944, 1945, and 1946, members of the public donated photographs and updated information about their loved ones. Both library staff and the public saved and donated newspaper clippings. Some of the files contain great amounts of detail, while others have just a name.
Date of Original
Summer 1944
Date Of Event
Summer 1944
Subject(s)
RAF
Royal Canadian Ordnance Corps
Royal Air Force
World War Two, 1939-1945
RCOC
RECCE
Reconnaissance Corps 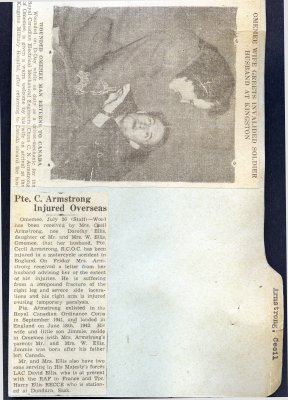