Full Text
June 7, 1944
Mrs. W. Armstrong of Oakwood, East, has received word that her husband has been killed in action in Italy. We extend to her and to his mother our sincere sympathy.


No date.
KILLED IN ACTION
Gnr. William H. Armstrong, R.C.A. son of Mrs. Armstrong has been reported killed in action on the Italian front on Tuesday, May 23rd.
He was born in Parry Sound where he attended Public and High School later moving with the family to Blackwater and later to Oakwood where his mother now resides.
Gnr. Armstrong had been overseas a year and had for some time been in the Italian Campaign. His two brothers Walter and Neil are on Active Service Overseas.
He is survived by his wife and baby son Douglas, his mother, Mrs. W. J. Armstrong of Oakwood, two brothers Walter and Neil and seven sisters Mildred, Merle, Edith, Wilma, Norma, Margaret and Audrey.
Media Type
Newspaper
Image
Text
Genealogical Resource
Item Types
Clippings
Articles
Notes
This card is part of a larger collection of World War II personnel clippings. The project began in 1944 at the Lindsay Library. The intent was to gather together as much information as possible on the military record and the service of people from the Town of Lindsay and the County of Victoria (now Kawartha Lakes)who served in the war. To that end, during the years 1944, 1945, and 1946, members of the public donated photographs and updated information about their loved ones. Both library staff and the public saved and donated newspaper clippings. Some of the files contain great amounts of detail, while others have just a name.
Date of Publication
7 Jun 1944
Subject(s)
Soldiers
War casualties
World War II 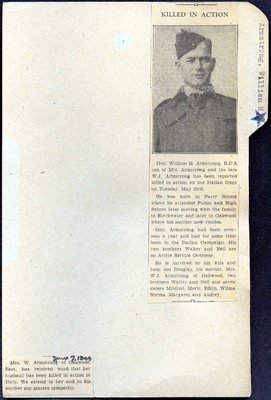