Full Text
April 8, 1943
Word has been received in town of the safe arrival overseas of Lieut. Ross Arnold.
Ross is the son of Mr. and Mrs. Thos. Arnold.


March 16, 1944
Mr. and Mrs. Thos. Arnold Sussex St. N. were in Toronto on Wednesday to meet their son Lieut. Ross Arnold who had just arrived from Overseas.

No date.
PO. Arnold and Mrs. Arnold of Toronto are staying at Bonnie View, Haliburton. F.O. Arnold has been overseas two years and is recovering from an injury to his spine.
Media Type
Newspaper
Image
Text
Genealogical Resource
Item Type
Clippings
Description
T. R. (Ross) Arnold of Lindsay enlisted in the Royal Canadian Artillery on January 7, 1941. Lieutenant Arnold was stationed at Petawawa, Ont. until he was sent overseas in March 1943. Lieut. Arnold was at #1 C.A.R.U. England. He took three courses on M.T. instruction during his service: Ottawa, Ont., Ryhl, North Wales, Brighton, England. Lieut. Arnold arrived home on March 10, 1944 and was given his discharge from the army on April 19, 1944.

Lieut. Arnold whose prewar occupation was automobile dealer in Lindsay, is again in this field and living in Lindsay.

T.R. Arnold of Lindsay was among the many veterans from this district who registered at the Reunion held at Lindsay Armouries on Saturday January 19th, 1946.

Notes
This card is part of a larger collection of World War II personnel clippings. The project began in 1944 at the Lindsay Library. The intent was to gather together as much information as possible on the military record and the service of people from the Town of Lindsay and the County of Victoria (now Kawartha Lakes)who served in the war. To that end, during the years 1944, 1945, and 1946, members of the public donated photographs and updated information about their loved ones. Both library staff and the public saved and donated newspaper clippings. Some of the files contain great amounts of detail, while others have just a name.
Subject(s)
Soldiers
Veterans
World War II
Soldiers -- Wounds and injuries 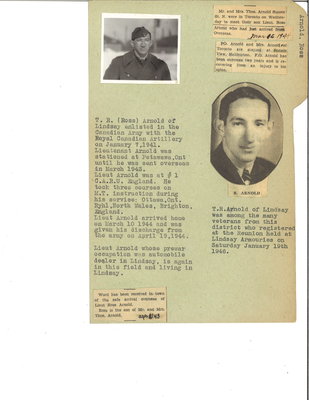