Compared to the great parade of 1976, this parade can only be described as sad, even pathetic. The participants formed up around the Lindsay Armoury, and the parade route was from the corner of Sussex and Kent eastward on Kent to William, then north to Peel Street, then west on Peel back to the Armoury.

There were only eight lodges represented in the parade. You will find more pictures on the SD card, but bear in mind all the lodges were photographed at least twice. Some lodges sent their banners hoping that other local personnel would carry them in the parade, but that did not happen.

There were trailers equipped with benches and chairs for older participants to sit on, and they could take part in the parade without having to walk the full length on a hot day. Note the large number of empty seats on these floats.

A horse was provided for King Billy, but the horse was not white, but a soft grey. There are cosmetic treatments available to temporarily whiten a coat, but this was not done. A bridle was installed on the horse's head, but no reins were provided, meaning the rider could not control the horse. The horse was so skittish he refused to let King Billy get in the saddle. The saddle itself was the wrong type: a brown western cowboy saddle instead of black English tack.

So the parade started with King Billy walking ahead of the horse which was pulled along by a groomsman with a rope to the bridle. This lasted only one block, and the horse was taken out of the parade, and King Billy finished the route on foot.

In the Kent street block in front of the Armoury I counted only 42 people on both sides of the street. The Lindsay Police service stopped the traffic initially coming down the hill from the west, but when the parade started the police left the intersection of Sussex and Kent and went to the head of the parade. This allowed traffic to enter the parade route unhindered, and those drivers were not warned there was a parade in progress. So we have a parade parallelled by incoming traffic. Stupid.

There were no large crowds watching anywhere, just the normal contingent of Kent Street shoppers on a Saturday afternoon. When the parade started its final leg going west on Peel Street, there were only four people on that street end to end, and one of them was me. There were only two cars in the parking lot opposite Mackey Funeral Home, and one was mine. The parade took only 20 minutes to pass by. The best part of the parade was the Lindsay Pipes and Drums.

I felt I was witnessing the end of an era; like watching a patient die of oxygen starvation, and taking far too long to do it.

However, I am fortunate that I did live through the glory days and got to see the REAL parade of 1976.
Date of Publication
12 Jul 2018
Personal Name(s)
Burke, Glen
Geographic Coverage
Copyright Statement
Copyright status unknown. Responsibility for determining the copyright status and any use rests exclusively with the user.
Contact
Kawartha Lakes Public Library
Email
WWW address
http://www.kawarthalakeslibrary.ca
Agency street/mail address
190 Kent St W.
Lindsay, ON K9V 2Y6
(705) 324-5632 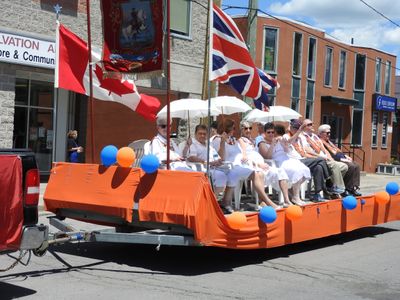