In the first half of the 20th century, Lindsay was a major railway hub for Central Ontario. There were two busy rail stations: the CNR at the south end of William Street, which served both freight and passengers, and the CPR, which had two stations: freight on Victoria Avenue near Glenelg Street and Russell Streets, along with a CPR passenger terminal at the west end of Queen Street.

In the Sixties, the changeover to diesel locomotives was underway, and Lindsay was losing its historic steam engines and the activity and employment associated with them. The Round House in Lindsay, just west of the CNR station was a maintenance facility that served all of Central Ontario, and steam engines would report there for wheel adjustments and boiler clean-outs. It was called the Round House due to its curved roof, under which at least eight locomotives could be served at the same time on several parallel tracks.

The busiest railway crossing in Lindsay was on Lindsay Street South at Durham Street, just east of the big CNR station. Freight trains would be assembled in its yard, which meant constant backing up and going forward in that area. There were no automatic signals, and not automatic gate, but there was a man on 24-hour duty there to stop traffic by waving a STOP sign in daytime and a red lantern at night. This worker was able to take shelter in a small house right beside the crossing, equipped with a coal-burning stove for winter heat.

After the steam engines disappeared, many people missed them dearly, and wanted their children to see these huffing, puffing giants, so whenever there was word of a visit by a preserved engine, great crowds would assemble, with little kids being carried on shoulders for a better view. One of these events took place in June of 1961.

Notes
1. Number 6167 approaches the remnant CNR station at the south end of William Street; by now the passenger station is gone, but there is a small freight shed left.

3. At the east end of the station grounds where there used to be a water tower for the engines. In this visit, the boiler had to be replenished by a firetruck pumper.

5. Looking south towards Kent Street. The building at top right is the old Silverwood’s Dairy building, demolished soon after, and replaced now by Kent Square.

6. On another occasion in January 1962, Number 6167 arrived in biting cold and still brought out large numbers.

7. On this same occasion the engine needed coal, but there was no way to load it but to bring in a truckload and fill the coal tender with aid of a power shovel.

8. With this view of No. 6167 you can see a large black cylinder on the front of the engine, just above the cow-catcher. This is the acetylene cylinder which fuelled its headlight, which shone a full mile into the night.

9. This shows the dismantling of track on the Victoria Railway which ran from Lindsay to Haliburton until 1952. The scene is where the 11th line of Somerville Twp. crosses the line south of Kinmount. 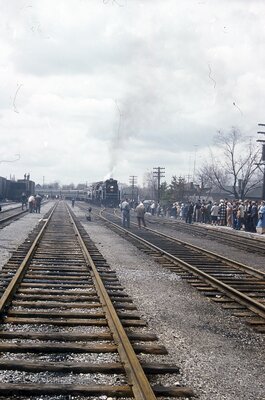 5. Trains next to Victoria Park (Silverwood's)