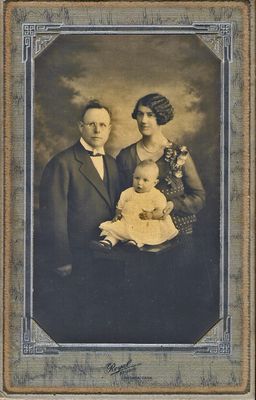 Lloyd Earl Hamilton and Lillian Aurelia and Lloyd Robert William, c1928 Details
Lloyd Earl Hamilton was the fourth child and third son of William Henry Hamilton and Margaret Emma Trennum. Like his two older brothers, Lloyd went west as a young man. From the enclosed photographs, he was in Edmonton by the summer of 1914. In the 1916 Census of the Prairie Provinces, he was enumerated as a bank clerk in Edmonton. Lloyd subsequently trained as a chiropractor, and set up his practice in Regina.