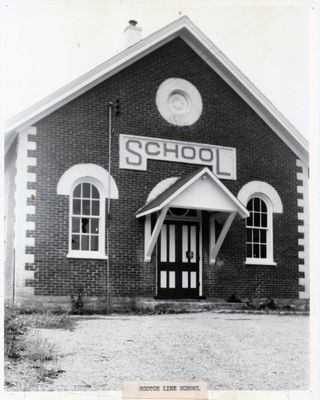 page 77 - Scotch Line School Details
The settled area known as "Scotch Line" used to have a school, a church, and a cheese factory at the corners of what is now Highway 36 and Scotch Line Road. None of these buildings remain.

The Lost Settlement of Scotch Line

The "Scotch Line" was first settled in 1833. "Early in that year, Captain Andrew Fraser, a Scotch veteran of Waterloo, located here on the lake shore. That same autumn brought a Highland Scotch contingent of two single brothers named McDonald, a McPhail with a grown-up son and daughter, and Robert Robertson with his wife, four little children and a nurse. The men had come in first to build log shacks, leaving their families in Peterborough. When the rude dwellings were ready, they brought in the remainder of the party by oxcart to Bridgenorth and thence through Chemong, Pigeon and Sturgeon Lakes by scow. They camped on the open shore of Sturgeon Lake on the night of October 29, 1833, and awoke the next morning to find the lake frozen solid." 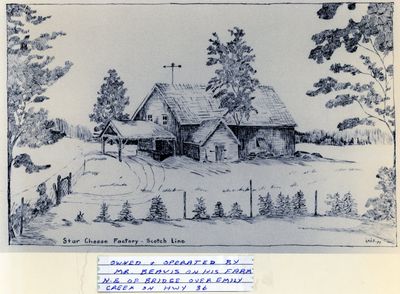 In the years 1888-1890, Mr. Archibald Beavis of Douro Township, Peterborough, conducted the cheese business in a rented factory at the base of the hill on the west side leading north of Downeyville in Emily Township. Previously, he had attended Business College in Peterborough and the Kingston Dairy School, to learn the art of cheese making.

In 1890, Mr. Beavis moved to a rented cheese factory on lot 5, concession 5, Scotchline, Verulam Township and made this community his future home. These premises were rented from 1890-1898 for the business of cheese making.


In 1898, he acquired land on the north side of #36 highway, lot 6, concession 5, one block west of the old site. A two story cheese factory building was erected on this height of land with a panoramic view of the country-side to the west. The factory was lined in ash and had four layers of insulating wood. A weather-vane with the Star symbol was on the pinnacle of the roof.

The business was conducted in this Scotchline community until 1935, by Mr. Beavis. In 1899 a home was built to the east of the factory and on the 15 March 1899, he married Elizabeth Jane Steele, daughter of Frederick Steele from the nearby Irish Line.

In the early years, one of the community social events was an oyster supper and dance held in the curing room of the factory, in the Fall season.

In later years, the son Elwood assisted and conducted the cheese making business until 1936. There was a gradual transition from the cheese to the whole milk industry in these years and a severe draught in the Summer of 1936, precipitated the termination of the business. 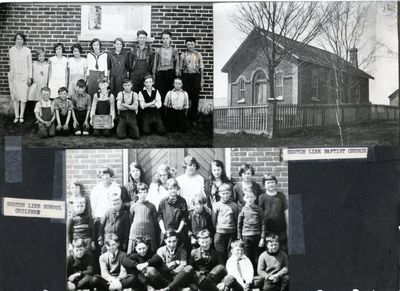 "Verulam School Section No. 1 was formed on 3 July 1854. A log school was opened on the Scotch Line on Lot 7, Concession 5, but it was destroyed by fire at an unknown date. A red brick schoolhouse was then erected for the school section on Lot 7, one concession east, on the Military Line. Despite the new location, the school retained its name as the Scotch Line School and it remained open until 1969, after which time all elementary students in Verulam were bussed to the Bobcaygeon Public School until 1978."
-- From Educating Victoria County by Ralph Robinson, 1987. 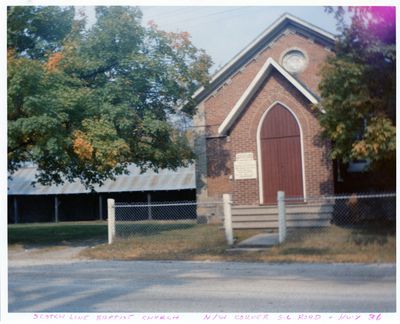 "Early residents wishing to worship the Baptist faith held meetings in their homes and later in a log schoolhouse that was situated on a corner of the farm belonging to Alec Robertson as late as 1946.
Three of the more prominent members of this congregation undertook to build a church for their place of worship. The location selected was part of Lot 6, Concession 5. The lot cost $20 and the deed refers to it being on Scots's Line, not the name we use today.
They erected a fairly large structure, with an arch-like entrance. Inside, the seats were heavy with iron rests at the end of the pews and a massive hand-carved pulpit and heavily constructed minister's chair were put in place on the platform. 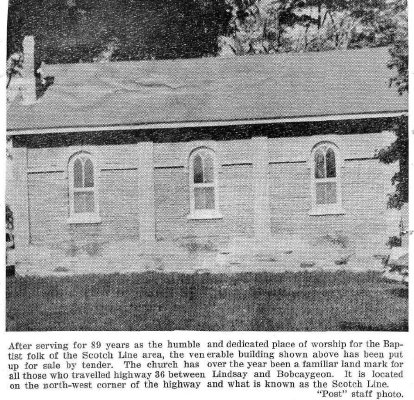 On the Main Street Details
The church was opened on the first Sunday in October 1876. Bobcaygeon and the Scotch Line Church remained together until 1929 when each became independent.
Services were held in this church until October 1964 when because of lack of patronage the deacons and trustees decided to dispose of it by tender.
In 1965 it was sold to Walter Albion Harrison for the sum of $2800. The piano, chairs, carpets, hymn books and offering plates went to the Bobcaygeon Baptist Church. The money from the sale of the building was turned over to the Bobcaygeon Baptist Church Building Fund. The pulpit chair, communion table and pews were donated to the Watford Baptist Church.
The lot and church were later sold to the Dept. of Highways and in 1969 they had the church building torn down."