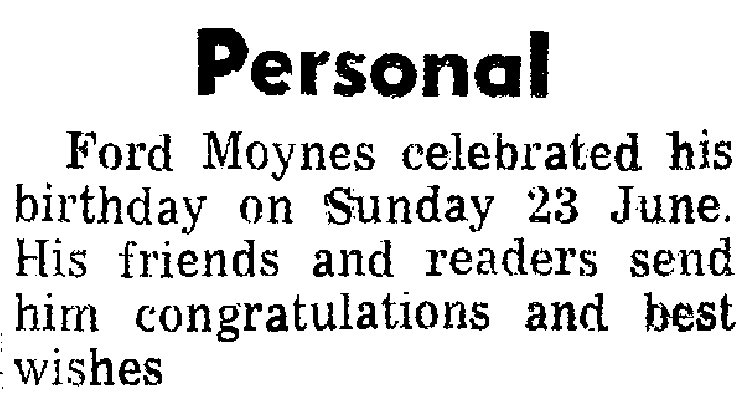 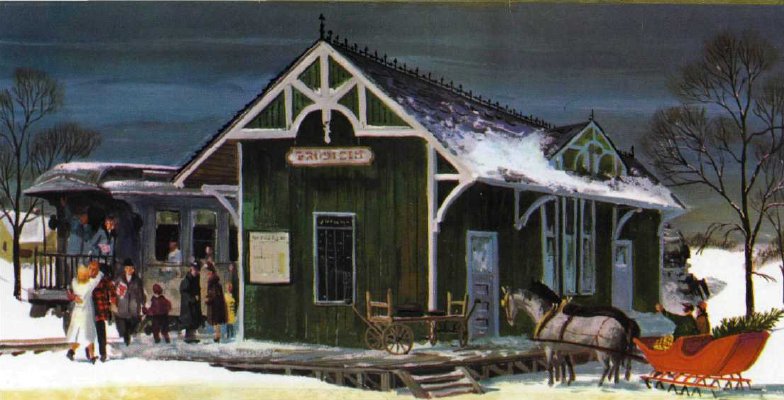 Christmas on the farm in days gone by... - 24 December 1964 Details
Ford Moynes began his first job when his family lived in Woodville, working for a local farmer. He knocked bugs off potato plants and cut down tall stalks of yellow mustard seeds.

When John Sinclair Moynes was hired to drive a team of horses for Sylvester Manufacturing, the family moved to Lindsay.

Sometime in the years between 1901-1906, Ford's mother took her three sons to her parent's farm for Christmas. Ford wrote about this time in the column, "Christmas on the Farm in Days Gone by" (24 December 1964), recalling the 3-hour train ride from Lindsay to Victoria Road that was followed by a long ride in a box sleigh filled with straw.


It was in Lindsay where Ford got his first newspaper job. He delivered papers for the Lindsay Post from the area of town known as Pumpkin Hollow over the river to the Grand Trunk railway station.

Ford's next job with the Post was feeding the printing press and operating a foot-pro­pelled job press. He soon ad­vanced to the typography mach­ine, then used for news setting, and then got his first writing jobs covering church meetings and sports events. 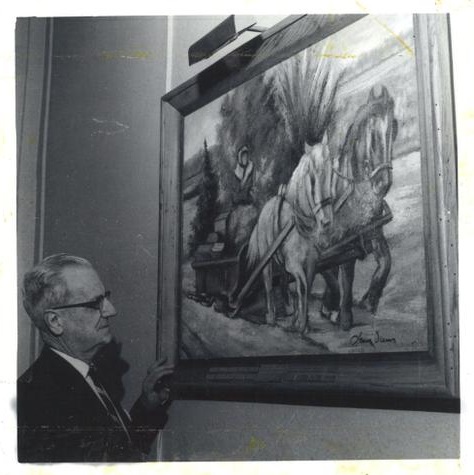 On the Main Street - 1965 Details
For two years Ford Moynes joined the news staff of the Stratford Herald, but returned to Lind­say to become editor of the weekly newspaper, the Watchman-Warder.

On 30 September 1908, Ford married Agnes Ethel Coburn (daughter of John Coburn and Elizabeth Lee) in Lindsay, Ontario. They lived at 1 Caroline Street in Lindsay. In 1920, Ford and Agnes welcomed a daughter, Jacquelyne, (who later moved to Ottawa and married Tom Price and had two children, Pat and Randy.)

In the winter of 1965, Ford and Jacquelyne presented this oil painting to the Lindsay Curling Club in Agnes's memory. Agnes was a chartered member of the club and an ardent curler. The frame of the painting contains nickle name-plates of the club's past-presidents. 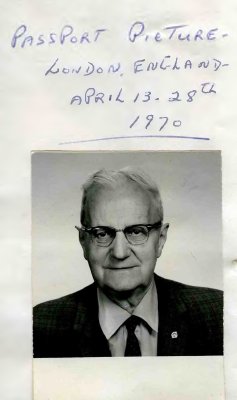 On the Main Street - 1970 Details
Ford Moynes traveled to England in 1970. He wrote about his two week vacation in this "On the Main Street" column dated 11 May 1970. He reports on his visits to lots of places, and also included a brief encounter with the Queen Mother:

"The writer [Ford Moynes] had a close up look at the Queen Mother as she left her special sedan and entered her private home. It was very noticeable that the home of the Queen Mother as well as the Queen, at Buck­ingham Palace, front directly on the street with court yards at one side. The home of the Prime Minister at 10 Down­ing Street is also directly on the street with no green lawn at the front."

It seems everywhere Ford went in London, he found history:

"A visit to the House of Commons brought to light a debate on the killing of seals in Canadian waters. Where members of Parliament in Canada sit behind desks, the Parliamentarians in the Brit­ish House have no desks. The House of Commons was one place struck by a German bomb and a large part de­stroyed by fire. A fair sized table near the Speaker of the House was donated by the Canadian Government." 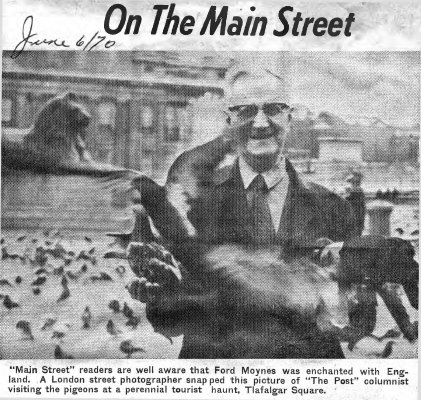 On the Main Street - 6 June 1970 Details
"The city is fill­ed with loyal Britishers and thousands of visitors clicking cameras around Trafalgar Square, take pictures around Nelson's tall monument where hundreds of pigeons light on any part of the human body to feed on the handfuls of grain bought by the many camera men — a spot in the big square where children have the thrill of their young lives feeding the birds."
-- Ford Moynes, 11 May 1970

In his scrapbooks, Ford Moynes pasted his passport photo, the columns he wrote about his trip, and photos from when he fed the pigeons at Trafalgar Square. 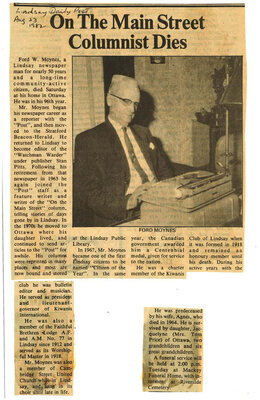 On the Main Street Columnist Dies - 23 August 1982 Details
Saturday, August 21, 1982, Ford Moynes passed away in his home in Ottawa. He had moved to Ottawa in the late 1970s to be close to his daughter and her family. At the time of his death, he had two grandchildren and six great-grandchildren. His funeral was held on August 24 at Mackey Funeral Home in Lindsay with interment at Riverside Cemetery. He was 96.