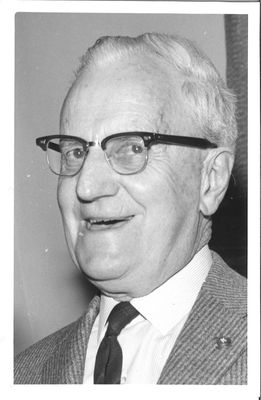 On the Main Street - January 1968 - Citizen of the Year photos Details
"It is individuals like Ford that have helped build this town." --Mayor John Eakins (25 January 1968)

After retiring as editor for the "Watchman-Warder", Ford W. Moynes joined the staff of the Lindsay Daily Post as a writer of feature articles and his own column, "On the Main Street". From 1963 until the mid-1970s, his columns appeared almost daily, each covering local current events or an aspect of local history, dating back through Lindsay's earliest days. Moynes was active in the community and his columns often drew from conversations with local citizens.

According to the Post, "His columns were reprinted in many places and most are now bound and stored at the Lindsay Public Library." (August 23, 1982) These bound volumes are scrapbooks that library staff believe were created by Ford Moynes and then donated to the library, and in the years since, library staff have added to the collection. The scrapbooks contain carefully folded copies of Moynes's columns pasted alongside photographs to sheets of paper. Most of these photos appeared in editions of the paper with Moynes's articles, so they likely came from the Post. The scrapbooks also contain personal letters addressed to Moynes, notes, and cards of congratulations and thanks. 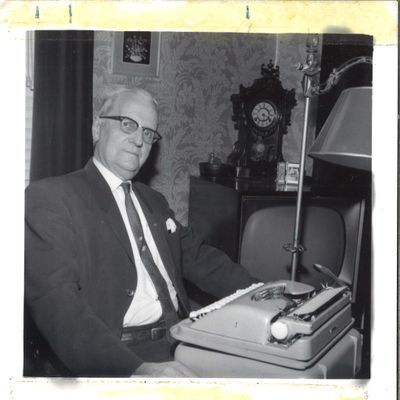 The Ford W. Moynes Collection consists of newspaper clippings dating from 1963 to 1971, written by local personality, Ford W. Moynes. They describe local businesses, people, cultural and sporting events, buildings, streets, hotels, parades, and more. The collection is important because of its emphasis on local history. The almost verbatim reporting style of I remember when and detailed reminiscences from locals who spoke with Mr. Moynes provides a unique perspective on local events not available elsewhere.

The assistance of the Lindsay Post is gratefully acknowledged.

Ford Moynes's "On the Main Street" columns were first uploaded to this Digital Archive in 2013 to be used as a newspaper resource, with each column in a separate record. In 2019 when it was learned the columns came from scrapbooks that contained photographs and much more about Moynes and his work, library staff added to the Digital Archive and created this exhibit to showcase Moynes and his impact on the local community.

In this exhibit you will find more information about the "On the Main Street" columns, the other items in the scrapbooks, and more about Ford Moynes, the man behind the typewriter. We invite you to explore the pages of this exhibit.


How to Navigate this Exhibit

Use "Next Panel" and "Previous Panel" or the menu on the left side of the screen to move through the pages of this exhibit.

Click on "Details" under an image to go to the record for that item.

When viewing a record, information about the item appears on the left side of the screen. A thumbnail image appears on the right, and below that is a violet link "Document (PDF)" or "Full Image". Click on this to view the full item.