Media Type
Image
Item Type
Photographs
Description
Black and white photograph of the exterior front of the Rittinger and Motz printing office, publishers of Berliner Journal, a German weekly. on the far left is the door of G.L. Pearson, dentist. A sign for the dental office can be seen beside the door and on the upper right door frame.

The Rittinger and Motz Printers was located where Jaimet's bookstore once stood at 42 King Street West (north side), Kitchener, Ontario.

In the same building is the dental office of G.L. Pearson. 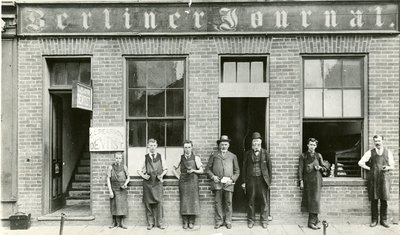