The Kitchener Public Utilities Commission operated a transit service in Kitchener and Waterloo from 1927 to 1973. It operated electric street railway cars along King Street in both cities from 1927 to 1946. Late in December of 1946 the streetcars were replaced with gasoline-powered buses and electric trolley buses. Even earlier the PUC had begun operating other transit routes with buses. These routes were called "cross-town lines."

The Kitchener PUC barn was situated opposite the passenger terminal (later Rockway Seniors Centre) at the east end of the street car tracks. In 2018 the car barn property is occupied by the Eastwood Community apartments at 1414 King St. E. and the Rockway Gardens Village apartments at 1420 King St. E.

A small section of the Kitchener PUC car barn is visible behind the back of the street car. The street car has been identified for the Kitchener Public Library as the No. 36 SED T tram and the date of the photo is given as November 1945.
Notes
Kitchener-Waterloo Street Railway car 36 (Peter Witt design) was manufactured by the Cincinnati Car Co. of Ohio and initially used in Cleveland.

Four images showing car 36 appear in the 2010 book Ontario's Grand River Valley Electric Railways by John M. Mills, part of which was published earlier as a 1977 book titled, Traction on the Grand: The Story of Electric Railways along Ontario's Grand River Valley.
Inscriptions
Advertisements are visible on the exterior of the streetcar. One that is legible is for Waterloo Coal Co. Ltd. and includes a company slogan: "You'll like our coal."
Date of Original
November 1945
Dimensions
Width: 17.5 cm
Height: 12.5 cm 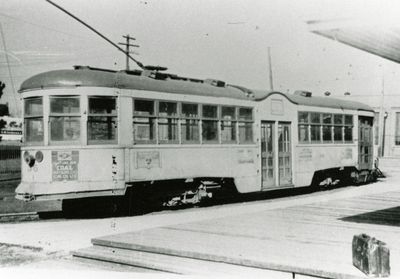