The driver's stool is visible, as are wooden, slat benches. Part of a no-smoking sign is visible. The backside of a sign reading "CNR Depot" is visible above the middle window.

The location of the street car is unknown.
Notes
The Kitchener Public Utilities Commission operated a transit service in Kitchener and Waterloo from 1927 to 1973. It operated electric street railway cars along King Street in both cities from 1927 to 1946. Late in December of 1946 the streetcars were replaced with gasoline-powered buses and electric trolley buses. Even earlier the PUC had begun operating other transit routes with buses. These routes were called "cross-town lines."

Before 1927 street railway service in Kitchener and Waterloo and Bridgeport was provided by the Kitchener-Waterloo Street Railway (created in 1919).

According to the website trainweb.org, two so-called "Birney safety cars" produced by the Ottawa Car Manufacturing Co. were obtained by the railway in 1923 and numbered 62 and 64. Both cars would regularly be used on the railway's line to the village of Bridgeport. From 1939 to 1946 they were used as "trippers" (supplementing regular service) on the main Waterloo line. Both cars were sold for scrap in 1947.

Birney cars, named for the U.S. engineer who designed them, were much lighter than traditional street cars and more economical. They were operated by a single operator, with no conductor.

A photo showing the exterior of car 64 can be seen at the website trainweb.org. The caption describes it as being 30 feet, 10 inches long and eight feet wide.

A photo showing car 64 operating on Lancaster Street West in Bridgeport (now part of Kitchener) also appears (page 160) in the book, Ontario's Grand River Valley Electric Railways, by John Mills (2010, Railfare DC Books). A second photo of car 64 taken in January 1947 appears on page 172. A third photo on page 172 shows car 64 in April 1950 when it was off the tracks and now home to the Traveller's Diner at Beachville, Ont., in Oxford County.
Inscriptions
The words "Kitchener & Waterloo car 64" were printed on the back of the original photo.
Date of Publication
1935
Dimensions
Width: 17.7 cm
Height: 12.6 cm 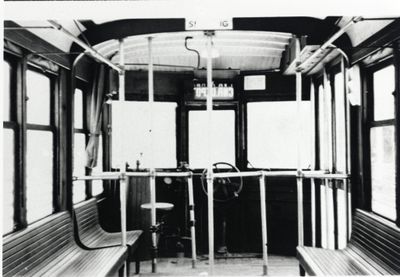