A no-smoking sign is visible hanging from the ceiling of the car. The driver's area is shown. Cushioned bench seating is visible.

The location is unknown.
Notes
The Kitchener Public Utilities Commission operated a transit service in Kitchener and Waterloo from 1927 to 1973. It operated electric street railway cars along King Street in both cities from 1927 to 1946. Late in December of 1946 the streetcars were replaced with gasoline-powered buses and electric trolley buses. Even earlier the PUC had begun operating other transit routes with buses. These routes were called "cross-town lines."

A history of local street railway service on the website Trainweb.org says "double truck" car No. 22 was purchased from Preston Car & Coach (Preston Car Co.) in 1912 by the Berlin & Waterloo Street Railway. Ownership passed to the Kitchener-Waterloo Street Railway operated by the Kitchener Public Utilities Commission. Car 22 was sold for scrap in 1947. Double truck cars can operate in either direction. 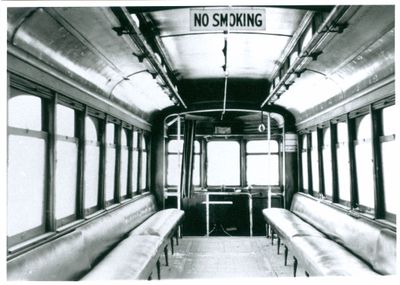