Media Type
Image
Item Type
Photographs
Description
Three obsolete Kitchener-Waterloo Street Railway cars sit beside a pile of removed rail track on the grounds of the Kitchener Public Utilities Commission "car barn" on King Street East in the Rockway Gardens area of Kitchener. In 2018 this is roughly opposite the City of Kitchener's Rockway Centre, a municipal community centre at 1405 King St. E., Kitchener.

Four homes that front on King Street East are visible in the top left of the photo. Another house and a shed are visible on the far right side of the photo.
Notes
The Kitchener Public Utilities Commission operated a transit service in Kitchener and Waterloo from 1927 to 1973. It operated electric street railway cars along King Street in both cities from 1927 to 1946. Late in December of 1946 the streetcars were replaced with gasoline-powered buses and electric trolley buses. Even earlier the PUC had begun operating other transit routes with buses. These routes were called "cross-town lines."

The Kitchener PUC "car barn," was situated opposite the passenger terminal (in 2019 the City of Kitchener's Rockway Centre) at the east end of the street car system's tracks. In 2019 the car barn property is occupied by the Eastwood Community apartments at 1414 King St. E. and the Rockway Gardens Village apartments at 1420 King St. E.

The four homes (rear view) on the left were still standing in January 2019. The home on the left, closest to the "car barn" property, is at 1354 King St. E. and in 2019 holds a private clinic operated by two podiatric consultants.
Inscriptions
Information on the back of the photo indicates these are cars 18, 14 and 16.
Date of Original
Spring 1943
Dimensions
Width: 17.7 cm
Height: 12.6 cm 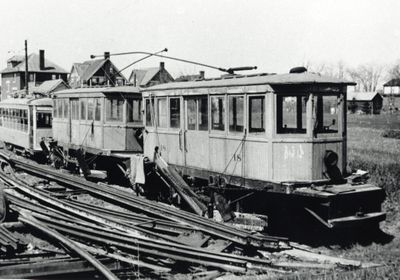