Creator
Unknown, Photographer
Media Type
Image
Item Type
Photographs
Description
Very old black-and-white photograph shows a gentle bend along a rural road, lined with a fence, in the area of the Waterloo County village of Doon. Some homes, business and farm buildings are visible in the distance. A vehicle of some kind is faintly visible on the road. On one section of the road there appears to be a separate lane or path immediately to the north. The road appears to cross a creek, possibly Schneider's Creek, which enters the Grand River at Doon.
Notes
Doon and Oregon were small villages in the former Township of Waterloo, which became part of the City of Kitchener on Jan. 1, 1973 when the Region of Waterloo was created and both Waterloo Township and Waterloo County ceased to exist. Oregon was farther from the Grand River and would come to be called Upper Doon. This marvelous image, probably from the early 1900s, was taken before the construction of Homer Watson Boulevard and before the construction of Doon South Drive. It looks generally west along Doon Village Road from a point near the entrance lane leading to today's Doon Public School at 1401 Doon Village Road. On some old maps Doon Village Road is called, "the old Huron Road." The "old school" referred to in the inscription on the back of the image was the Waterloo Township School Section 27 school, located on the north side of Doon Village Road in this area. Built of brick, it opened in 1878 and was often called the "Bonnie Doon" school. It was destroyed by fire in 1956.

The Schneider house farm mentioned in the inscription is a reference to the large farm property of Christian Schneider, who settled here after coming north from Pennsylvania in the early 1800s. This same image is described in an article, Doon 1867 - Before And After, that appears in the 1966 (volume 54) annual report of the Waterloo Historical Society, written by Marguerite Bechtel Eby. She writes that the two-storey log homestead of Christian Schneider is seen on the far right of the photo and that it was demolished in 1934. The photo is credited to George Ayers, a Doon resident who provided the negative used for publication. Another photo showing the Schneider homestead also accompanies the article.

Buildings used by the Perine Brothers, flax and linen manufacturers in Doon, are visible on both sides of the road. Some of these buildings are still standing in 2020. The Perine Brothers flax mill was renamed Doon Twines by later owners and the business was relocated to Berlin, now Kitchener.
Inscriptions
A handwritten note on the back of the photograph: "Doon looking west from old school onto Schneider house farm."
Date of Original
1920
Date Of Event
1920
Dimensions
Width: 10.8
Height: 8.6 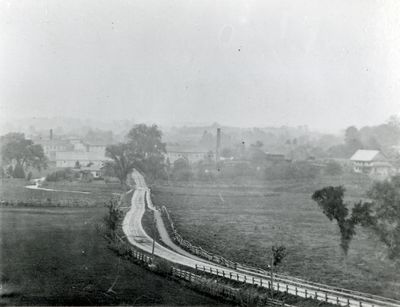