These are not conventional "soldier" uniforms, but look to be "aviator" uniforms. The Cdn Air Corp was formed just at or after the end of WW1, starting at Camp Borden I believe,

These 2 may be in the English version uniforms of the WW1 RFC/RAC (Royal Flying/Air Corps) As in the army, young men anxious to serve moved where they could immediately go into action, not wait while governments made decisions &/or these uniforms may date post WW1

Suggestions: perhaps the Camp Borden archivist could help...I toured in Feb & they do have uniforms on display there with which to compare & are preparing for their 100 yr anniv. celebrations in 1916 for the army training camp & the ``airforce`` part opened a few years later

There are photos, but as far as I know, no data base If there was a WW1 circa air field in your area, (likely to be a municipal air port by now), there may be records there, or c/o one of the archives or info c/o the local Legion...these fellows may have been early members

It would be very neat if one of them was the exciting & famous: ◦Ernest Lloyd Janney was born in 1894, Galt (Cambridge), Waterloo Region, Ontario a son of William and Elizabeth Janney. At the beginning of World War I, Mr. Janney, like many of his generation, was caught up in the excitement of the time. However, instead of enlisting in the army he pushed for the establishment of a Canadian flying corps... Cambridge Mosaic, Jim Quantrell, 1998, City of Cambridge

added comment to my earlier one re the 2 aviators I've just located another photo from your collection which portrays the uniform of an identified aviator: Cadet Walter T. Philip, the son of George 'Pop' Philip, was born in Detroit, Michigan. He enlisted at Kitchener, Ontario, in the Royal Flying Corps. He was killed in an accident at Leaside, Ontario, on 5 September 1918. One can easily see the similarity of the uniforms to W T Philip & that opens another option: the US Air Corps. Given their start by Wilbur & Orville, they undoubtedly had one, although I am not sure of the dates/history

Any way to scan the shoulder flash at a higher resolution & to glean any ID info from it, & to narrow the search field?

Hi - Thanks for the information on the uniforms. I will certainly look into this. I am unable to provide a scan of the shoulder flashes at this point as our photo collections are in storage due to the construction and renovation project at our location. When we are settled and our collections are back, I will do the scan. 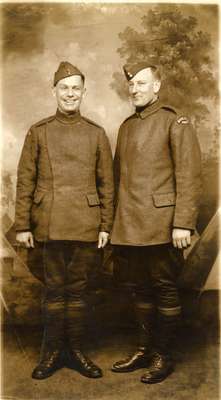 Comments may be edited for appropriate language and HTML.

All fields are required.

Not all comments will be posted.

Your email address will be stored so that we may contact you again about your comment, but will not be displayed to the public, or otherwise shared, without your permission.

Comments will not be posted until they have been reviewed.