Media Type
Image
Item Type
Postcards
Description
Ski Jump Inn, Huntsville, Ont. on No. 11 Highway, 3 miles south of Huntsville in winter. Originally named Jorlea Lodge.
Notes
Ski Jump Inn was built in 1948 by Jim and Margery Jordan, together with Jim's sister and husband Jean and Bill Leadbeater. It was originally named Jorlea Lodge. The name was changed in the early 50's when an American advertising executive suggested changing the name to Ski Jump Inn. The Inn was adjacent to a 98 acre parcel of land, the former Stevens' property, that the Huntsville Ski Club had purchased and opened to the public in 1947 complete with a ski tow. In 1948 a ski jump was added to the facility called the Big Vic, after the builder, Victor Woodcock. While the Inn was under construction a log cabin of 800 square feet was built to provide a temporary residence. This structure later became the Jorlea Trading Post, a gift shop for fine woolens and tartans and when the Inn was sold was reassembled on Vernon Lake at Vernon shores on North Court.
The Inn operated as a ski lodge in the winter and a motel in the summer. In 1954 the Leadbeaters relinquished their partnership, returning to Toronto where Bill became a sussessful life insurance agent. In 1962 an 11 unit motel was added along with a swimming pool. In the mid 70's, with the impending widening of Hwy 11 from 2 to 4 lanes, the business was sold to the Department of Highways, since it was losing its highway entrance. The Inn was sold again but without the highway entrance it never really regained its former glory. Today it is an apartment complex.
Inscriptions
Ski-Jump Inn, On No. 11 Highway, 3 miles south of Huntsville, Ontario
Place of Publication
Canada
Date of Original
1949-1952
Date Of Event
1949-1952
Dimensions
Width: 14 cm
Height: 9 cm 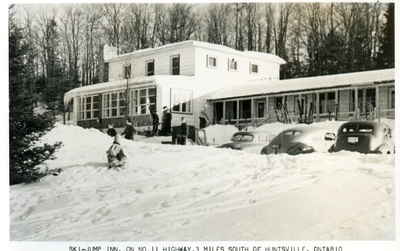