Creator
Annabelle Studio, Photographer
Media Type
Image
Item Type
Postcards
Description
Engine Number Five and the Portage Flyer train during the summer of 1948. In this photo Engine Five carries the number plate from Porter Number One. This number plate disappeared by 1949. (From By Steamboat and Steamtrain, written by Niall MacKay, 1882)
Notes
The major obstacle to water navigation between Huntsville and the resorts on Lake of Bays was the portage between Penninsula Lake and Lake of Bays. Although only a distance of one mile separated the two lakes, the difference in elevation betwen the lakes was
100 feet with the ridge of land adding an additional 70 feet. This made it impractical to build a canal. In 1900, the Huntsville and Lake of Bays Navigation Company obtained a charter to construct a railway over the portage under the name of The Huntsville and Lake of Bays Railway. Construction began in 1903 and was opened for operation in 1905. The railway was built to the narrow gauge of three feet and one-half inches between rails based on second hand equipment purchased from the E.B. Eddy Company of Hull Quebec, consisting of two 1888 vintage H.K. Porter 0-4-0 saddle tank locomotives and two twelve-foot by five-foot four wheeled box cars. In 1948 the original locomotives were sold and replaced by Locomotives Number Seven and Number Five and a new engine shed was erected to accomodate them. The S.S.Iroquois which had been built at the South Portage in 1907 to do the South Portage-Dorset run, sank at the South Portage in 1950. The S.S. Iroquois II which began the South Portage-Dorset run in 1949 saw its last season in 1958. The S.S. Algonquin which ran from Huntsville to the South Portage, was retired in 1952. The Portage Flyer operated on its own for its last season in 1959.
For information on the restoration of the Portage Flyer see, Rebirth of the Portage Flyer by Russ Nicholls, c2005. An Ontario Provincial plaque commemorating the Huntsville and Lake of Bays Railway Company was unveiled at the South Portage Dock, August 21, 2007.
Inscriptions
"The Portage Flyer" at Portage, Lake of Bays, Muskoka
photo by AnnaBelle Studio 484
Place of Publication
Canada
Date of Original
1948-1949
Date Of Event
1948-1949
Dimensions
Width: 14 cm
Height: 9 cm 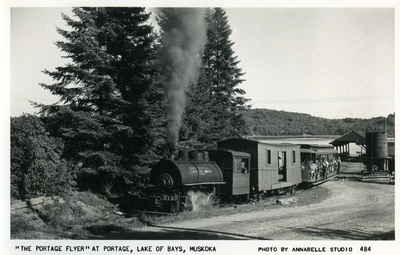