From Huntsville Lake of Bays, Pictures From the Past, by the Research Committee of the Muskoka Pioneer Village, c1986.
From available records it is believed that Frank Peelar was the first settler on this land and at least one of his original buildings still stands. Peelar carved out his little farm on thirty-three acres, receiving his patent on august 30, 1912.
Gordon Hill, proprietor of Limberlost Lodge was the next owner, acquiring the property in the late 1920s or early 30s. He had several log buildings built, which he used as an outpost camp for his riding guests, many of whom were convinced that an overnight stay at Interlocken was the highlight of their vacation. It was Gordon who gave it the name Interlocken.
In 1941 the Royal Norwegian Air Force took over the property and renamed it "Vesle Skaugum" ("a home or clearing in the woods"), so named in honour of Crown Prince Olav's summer home in Norway. A new log building was erected patterned on the same plan as Olav's summer home. The Norwegians used Vesle Skaugum as a rest and training camp for their young flyers who had escaped from their war torn country.
The setting was ideal. A level field served admirably for standard drill and sports, while the surrounding wooded country was perfect for hiking, survival training and cross-country skiing in winter. Part of the training included a thirty-seven kilometre cross-country ski race with full packs.
Following the end of World War II, in September 1945, the Kiwanis Clubs of Toronto purchased the property and operated it for many years as a summer camp for underprivileged children.
In 1979 the present owners purchased Interlocken and currently operate Olympia sports Camp there.
Over the fireplace in the main building is the inscription "MERKJE-DET-STEND-UM-MANNE-HAN-STUPE", which translates into English as "The mark of men will stand though man may fall."

Prince Olav and Princess Martha visited the camp in January 1942 and invited the mayor of Huntsville, R. Arthur Hutcheson, to dinner. The Muskoka atmosphere apparently appealed to the Norwegians, who moved their air base from Toronto to Muskoka. Crown Prince Olav officially opened the base at the Muskoka Airport on May 4, 1942.
Date of Original
1941-1945
Date Of Event
1941-1945
Subject(s)
Military facilities
Local identifier
647
Collection
private collection
Geographic Coverage
Copyright Statement
Copyright status unknown. Responsibility for determining the copyright status and any use rests exclusively with the user.
Contact
Huntsville Public Library
Email
WWW address
http://www.huntsvillelibrary.ca/en/index.asp
Agency street/mail address
7 Minerva St. E.
Huntsville, ON P1H1W4 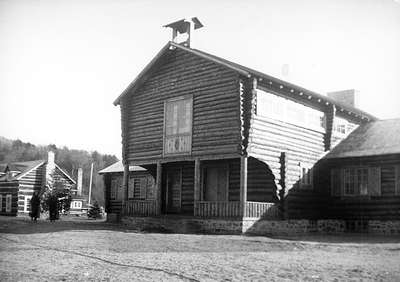