Media Type
Image
Item Type
Photographs
Description
Ski train to Huntsville, Ontario, 1930s.
Notes
From Huntsville With Spirit and Resolve by Susan Pryke, c2000.
"Seeing that people were willing to go to great effort and expense to sample the delights of a winter holiday, Mayor J. Frank Kelly announced in February 1932 that council must "set to work immediately to provide winter recreation facilities in Memorial Park". Kelly's promotion of winter sports put Huntsville in the forefront of tourist endeavors for the next two decades. With the assistance of the innovative Huntsville Ski Club, Kelly transformed Huntsville into a storybook winter town. Rows of evergreen trees sprouted along the main street. Coloured lights twinkled above the snow banks. A St, Bernard dog pulled sleighs of tourists from the train station to the downtown stores. the entire atmosphere, down to the socks of the people's feet, was orchestrated to promote a carnival theme. Photographers could not resist snapping pictures of Kelly himself in his flaming red ski jacket and peaked cap.
In march 1932 the Huntsville Ski Club, formed in February 1932, invited Greg Clarke to join them for a ski excursion. Regarded as "one of the best known and beloved journalists in Ontario", Clarke spoke with enthusiasm about Huntsville's potential to become a ski mecca. He said Lake Placid had similar beginnings. He encouraged the townsfolk to do what Lake Placid had done to create a centre for winter tourism.
The Board of Trade and the ski club set to work on a promotion campaign with the cooperation of the Canadian National Railway, which had agreed to run "cent a mile" ski trains to Huntsville for the winter season.
in mid-January 1933, Huntsville hosted its first winter carnival...A special ski train, with reduced fares, whisked the skiers north. The townsfolk met the visitors at the station and led them by a torchlight parade to the town hall. Here they registered for events and sorted out their lodgings. But few of them went to bed. They returned to the town hall auditorium for a jamboree and danced until 3 a.m. Then followed two days of skiing excursions, slalom races at Stevens Hill (near the main highway south of town), and other festivities, including an energetic "moccasin dance" on the ice at the arena.
Huntsville repeated the performance in following years, and eventually held three winter carnivals a season.

By the late 1930s the CNR ran six ski trains a season, with cut-rate fares subsidized by the towns of Gravenhurst, Bracebridge, and Huntsville. Huntsville's Sunday Ski events had become so popular that religious leaders began to worry that the Sabbath was not being kept properly. In March 1941 the heads of the Protestant churches took their complaint to the provincial legislature where they tabled a petition against Sunday ski trains.
Date of Original
1930-1945
Date Of Event
1930-1945
Subject(s)
Skiing
Winter carnivals
Local identifier
641
Collection
private collection
Geographic Coverage
Copyright Statement
Copyright status unknown. Responsibility for determining the copyright status and any use rests exclusively with the user.
Contact
Huntsville Public Library
Email
WWW address
http://www.huntsvillelibrary.ca/en/index.asp
Agency street/mail address
7 Minerva St. E.
Huntsville, ON P1H1W4 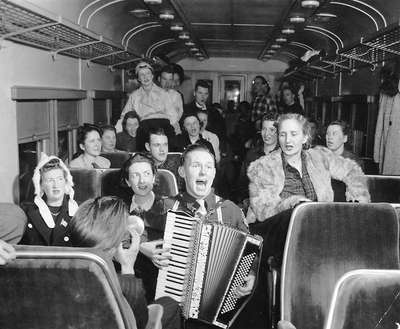