Notes
From: The Steamboat Era in the Muskokas, Vol. 1 - The Golden Years, by Richard Tatley.
"Early in 1897, the residents of Port Sydney decided, as a community co-operative venture, to build a cheese factory beside the river. By July it was turning out abut 300 lbs. of cheese every day, and providing an important market for the local farmer's milk. Partly as a result of this development, Sydney-Smith decided to build a new, larger steamboat, whose duties would include gathering cans of milk at all the local landings, as well as towing timber rafts to the various sawmills and running regular market trips to Huntsville. The new steamer was built on skids on the east side of the river, just north of Sydney-Smith's sawmill, close to the spot where the old Northern was launched twenty years before. She was supposed to be ready by June, but work took much longer than expected. Not until July 15th, did she actually hit the waves. She was christened the Gem, which seemed oddly comical, since she was a stubby little craft with a distinct tendency to roll as she puffed along...The Gem was 35 feet in keel by 10 feet in beam, and registered 6.12 tons. Every Saturday she would take householders of Port Sydney to Huntsville to do their weekly shopping, departing about 9:00 a.m. and leaving Huntsville around 4:30. The trip took about one-and-one-half hours, depending on the number of stops she had to make on the way: passing through the locks alone required fifteen to twenty minutes. On weekdays the vessel combined towing logs, slabs and tanbark into Huntsville or Port Sydney, with collecting cans of milk on alternate days. In 1899 the cheese factory consumed 5000,000lbs. of milk, most of which was transported by the Gem. She was also available to run picnics and pleasure cruises, sometimes by moonlight, and as the tourist industry became better established, she was sometimes chartered by the resorts to tour the lakes or attend regattas."
On November 20, 1903, the Gem caught fire while docked near the Navigation Company office in Huntsville. The burning boat was pushed away from the wharf, and by the time the Huntsville fire brigade arrived, she was too far away to be helped. The blazing steamer drifted over to the opposite shore, where she grounded and sank. Her patrons were left stranded as a result but the S.S. Joe was engaged to take them back to Port Sydney. The loss was a heavy one for Sydney-Smith, whose insurance on the vessel had just run out. He had the hulk of the Gem pumped out and towed back to Port Sydney, where she was lengthened and rebuilt over the winter. Both her master, Captain Lyle Casselman and Captain Denton, assisted in the work. The new Gem was ready by July of 1904. Now 51 feet in keel and registered anew at 18 tons, she was steadier and far more commodious than before. Norman "Gibby" Keith acquired the Gem from Sydney-Smith about 1921 and then sold it to Captain May in 1924. About 1931 she was dismantled and abandoned on the north shore of Lake Vernon, not far from Huntsville. Her original owner, Albert Sydney-Smith had predeceased her on October 2, 1925.
The S.S. Joe was built in Huntsville in 1900 by James Craig of Port Hope. Length 65 feet and width 13 feet. Registered at 38.89 tons. Named after Captain Marsh's youngest daughter Miss Josephine. It was used as a tug and passenger vessel on all the lakes served by the Navigation Company,from 1901 until it was dismantled in 1919. 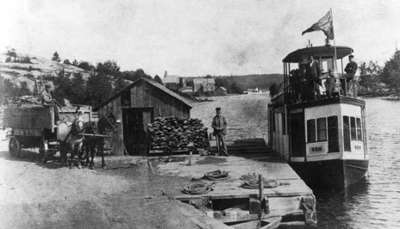