QUEENSTON — The first large project of Queenston-St.Davids Women's Institute after it was organized in May of 1908, was to raise funds to erect a community hall, to be named in honor of Queenston's and Canada's own heroine, Laura Secord. A new school was also mooted at this time. By joining forces, the Laura Secord Memorial Hall became a part of the new school, the corner stone of which was laid in 1914.

The hall was complete with a stage, and a kitchen also provided. The drop screen of the stage, acquired a little later, is a reproduction of an early painting of Queenston, with the first monument to Sir Isaac Brock.

It was in April of 1059 that Queenston-St. Davids Institute first learned that the Louis Tussaud Wax Museum, to be opened that summer in the former Fox Head Hotel, would not contain the figure of Laura Secord.

While some historians may discount her warning to Col. Fitzgibbon as making no difference to the outcome of the ensuing battle, her walk was, nevertheless, an act of heroism and endurance, an act which should not be forgotten. It was felt by Institute members, that it would be a very grave omission, not to include her figure in the Museum. A petition was therefore circulated, not only among Institute members, but more widely, and sent to the Museum owners.

History records deeds of importance of bravery and heroism, but seldom does it record the physical aspects of an individual. No television cameras, then as now, recorded important events and few photographs were made. Much research was required before authentic information as to height, size colour of hair, eyes and complexion, style of clothing etc. was acquired.

All this was needed before even a beginning could be made on the figure. Laura Secord had been dead for nearly a hundred years, as were those who, as children, might have known her.

One of these had been her last surviving granddaughter, Laura Secord Clarke, who had, in 1923, unveiled a plaque at the Laura Secord Memorial School,

and in 1934 with J. G. FitzGibbon, only surviving grandson of Col. FitzGibbon, unveiled life size figures of their ancestors in old Fort York.

Finally enough information was obtained and early this year, the Institute's petition bore fruit, as the figure of Laura Secord was received and placed in the museum. Thou-sands of school children, as well as adults, will view it along with the many other figures of important persons. On Thursday afternoon, members of the Queenston — St. Davids Women's Institute toured the museum and saw the culmination of their efforts.

Laura Secord, the first Canadian woman to emerge from history into Louis Tussaud's English Wax Museum, on Clifton Hill may also be the first in a long line of Canadian historic figures to be placed in the museum as Canada's Centennial year approaches.

* Laura arrived at the museum two months ago and before the year-end at least 500,000 persons will have seen her. In June alone 40,000 children are expected to pause ait the big weeping willow tree where the frightened Laura hides from an Indian scout who stands a few feet away, leaning on his gun and peering sombrely into the distance.

In the museum the life-size Laura has been placed opposite figures depicting General Brock's death as he led the change up the base off the Heights at Queenston.

Last June 18,000 children from all parts of Ontario as well as from the United States visited the museum and more than double that number are expected this year in the wake of a campaign launched by the Greater Niagara Chamber of Commerce to bring more boys and girls into this historic district.

"Canada's individuality as a nation depends on the child in the school," wrote the Chamber in a letter to the schools. This year special trains are expected to bring children into the area from all over the province. By bus they will be taken along the 14-mile route followed by Laura when in June, 1813, she left her home at Queenston to go to warm the British that the Americans were coming.

The tour will end at the museum where the children will see Laura as she must have looked at that time.

Laura, complete to the last detail of her dress, is the creation of the Louis Tussaud wax artists of Blackpool, England, and the result of more than two years' extensive research. She is here as the result of a petition to the museum from Queenston-St. David Women's Institute to include the Canadian heroine in its collection.

One of the museum's first moves was to get an authentic photograph of Laura. This was sent to the figure maker in England. Using this as guide he modelled a head in clay from which was formed the wax head now seen on the figure.

Before the head was completed at least 45 skilled persons had worked on it, including the complexion girl whose job it was to give the face the fair coloring which historians have described Laura as having.

It was the hairsetter's responsibility to see that the heroine's brown locks looked as pictured. Adding two hairs at a time to the head, it took him from 45 to 50 hours to put 54,000 hairs on her head.

Other details such as height and the color of her eyes were learned in the research. Today in the museum, Laura is 5 feet 3 inches tall, has a 34-inch bust, a waist of 22, and hips of 37 inches. Her eyes are brown.

The costuming for Laura Secord and the accompanying buckskin-clad brave cost $400. Laura's dress is a chintz material with brown background, presumably having been dyed with butternut bark. Details are accurate right down to the long flannel petticoat.

Laura also wears a cottage bonnet which was required of all married women of that era.

History records that Laura Secord was born Laura Ingersoll Sept. 13, 1775 and that she was 38 when she trudged through the woods on that eventful day.

That she had a cow with her has been largely discounted as pure fiction.

As for the Brown Bess rifle on which the Indian leans, it was bought by the museum from a Toronto collector. While there are a lot of these rifles around, there are few in working condition, said a museum official. It is a case of authenticity at all costs.

Laura Secord lived to be 93. She died Oct. 17, 1868, and is buried in Drummond Hill Cemetery on the Lundy's Lane battlefield. 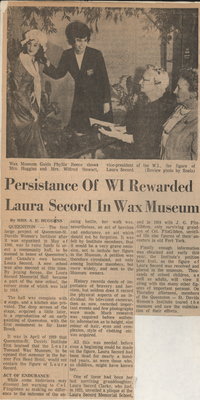