Above a news item on May 10, 1960, The Standard carried a headline, Cayuga Sails Into Oblivion.

On at least two previous occasions the hardy veteran of the lakes had proved everybody wrong. Twice she was retired, twice re-fitted and re-floated to carry passengers from Toronto to Queenston.

AND TOMORROW, in Toronto, it will be shown that she sailed, not into oblivion, but into a place in Canadian marine history.

At the Marine Museum of Upper Canada, Toronto's Mayor Donald D. Summerville will open the Steamship Cayuga Exhibition tomorrow as well as the Canal Room.

Guests at the exhibition opening will include steamship and harbor officials, many of whom were closely associated with the Cayuga during her checkered career.

THOUGH HER hull and superstructure have been smashed for scrap, such key equipment as the wheel, compass and binnacle, engine room telegraph, searchlight and whistle will be on display in a realistic reconstruction of the navigating island over the wheel house of the old ship.

The 305 ft. Cayuga faced the threat of the scrap yards for several years before she was finally let go to the wrecking block. On two previous occasions, she was saved from destruction by a group of shareholders who just did not want to see her die.

She was built in 1907 for Canada Steamship Lines at the Canadian Shipbuilding Co., yards in Toronto, and plied steadily between the city and Queenston until 1952.

In that year Canada Steamships abandoned its 78-year-old run to Queenston — and Cayuga was out of a job. But the rest of the year she lent her name — and still-serviceable hull and super-structure — to a new passenger enterprise. But still using the same Toronto to Queenston route.

The new company, Cayuga Steamship Co., was a stock venture to refloat the popular institution, which had rested forlornly moored in Toronto harbor after retirement.

FEW WANTED to see Cayuga go — but fewer seemed to want to ride on her. Under constant threat of closure of services through lack of business, the old vessel chugged through four uncertain seasons — floating on the sentiment of 700 shareholders.

The end came in the spring of 1959 when she rolled in a high wind and damaged her superstructure.

But it was the end only of the struts and timbers. The memory of the ship is firmly implanted in ports where she sailed — and memories will be reinforced by the new exhibition.

MOST OF THE navigating island gear was donated by Greenspoon Brothers, while the ship's bell, port and starboard lanterns and life rings have been permanently loaned by the CBC.

There will be a pictorial display along with the surviving fixtures — and a gathering of old friends as Cayuga is launched again — but this time on dry land. 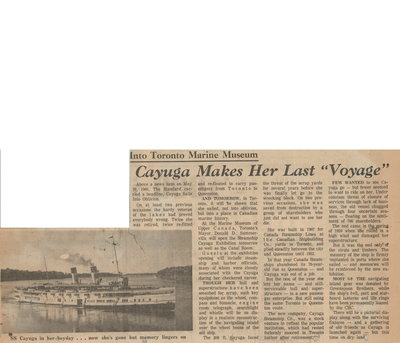