Newspaper photos description:
"The picture at the top above the two-room addition to Laura Secord Memorial School at Queenston that will be formally opened this evening. Constructed at a cost of $53,426, it has been in use for several weeks but the formal opening has been delayed until the actual completion of the interior. In the second picture is the student body, staff and some parents at the time of the opening of the old section of the school in 1915.
In the picture below are the old principal, C. R. Kilkenny and his pupils, many of them leaders in the affairs of Niagara Township today, in 1904"
Place of Publication
Niagara Falls, Ontario
Date of Publication
16 Mar 1953
Subject(s)
Education
Schools
Schools - Public - Elementary
Queenston (Ont.)
Local identifier
QC00220; QC00221; QC00307
Language of Item
English
Geographic Coverage
Donor
Huggins, Jean A. E. (1895-1989)
Copyright Statement
Copyright status unknown. Responsibility for determining the copyright status and any use rests exclusively with the user.
Contact
Niagara-on-the-Lake Public Library
Email
Website
http://www.notlpubliclibrary.org
Agency street/mail address
10 Anderson Lane P.O. Box 430
Niagara-on-the-Lake, ON L0S 1J0
905-468-2023
Full Text

GOD SAVE THE QUEEN

QUEENSTON (Special)—It was back in 1844, when Queenston was the head of navigation for Lake Ontario; when shiploads of goods were portaged by mule team to Chippawa; when a horse railway partly replaced the mule teaming; when Queenston was a thriving place, reputed to have thirteen hotels and four liquor stores, and a shoe factory, hiring forty workmen—that the Old Stone School— as it was later called, was built. If, as is reported, the school had two classrooms and upward of one hundred and fifty pupils, over-crowding was a problem then as well as now. Perhaps later on, enrolment decreased because only one teacher' was needed. Methodist Church services were held, at one time, in the basement, possibly before the present United Church was built in 1862.

In 1842, the District Municipal Act had come into force and Niagara Township was divided into eleven school districts. Queenston's district was number four.

The cost of the stone school is not available but it is recorded that on Oct. 2, 1850, Municipal Council of the Township of Niagara raised, levied and collected by equal assessment upon all the rateable property in the school section No. 4 of the Township of Niagara the sum of 40 pounds to apply in payment of teachers wages." In 1869 school rates collected in the section were $375. In 1872, including the cost of building school houses, Niagara Township raised $2,985.81.

In 1876 a by-law was passed to raise $101.25 by municipal tax in payment of the Niagara High School Board of Trustees bill for the current year and the next year a by-law was passed to appropriate #2,008.47 of the municipal loan fund (set apart for educational purposes) to pay for the high school building. Incidentally the mill rate that year in Niagara Township was 1.5 mills.

Early in the present century, the old stone school was considered too antiquated and the ratepayers voted for an up-to-date school. At this time, the Queenston Women's institute, organized in 1908, was advocating the building of a hall, as a suitable memorial to Queenston's own heroine, Laura Secord. A site was promised by the Park Commission and donations received from many sources. Sometime later, when the plans for a fine red brick school were chosen—the decision was made to include a large auditorium with fully equipped stage and kitchen. The school itself had two large classrooms with two cloakrooms each, a library teachers' room, pressure water fountains and indoor lavatories. Many large donations were received and helped with furnishing and equipping. On Sept. 18, 1915, the Laura Secord Memorial School was formally opened and dedicated. Many changes have taken place since. In 1920-21 when the Queenston generating station was being built, school attendance so increased that the cloak rooms of the junior room were converted into a third class room. By 1929, two teachers again were sufficient. In 1949 the increase, had again started and this time the stage of the auditorium was utilized as a class room and a third teacher hired.

This past September the registration was 152, and, while the new wing was being built a part of the auditorium was partitioned off for the fourth class room.

Only two principals have guided the school affairs of the Laura Secord Memorial School, the late C. R. Kilkenny and Miss H. A. Corman who began her duties in September 1918.

Miss Corman has taught the children of many of her former pupils. Since the opening of the school in 1915 there have been 19 other teachers in charge of the junior, third and now fourth rooms.

The cost of the Laura Secord Memorial School in 1915, with furnishings and equipment was around $23,000. Contract for the new wing was set at $53,426. Added to this, the furnishings, architect, contingencies -a new heating equipment for the whole school, enlarging the original wash rooms to service the whole school, the debenture issue of $60,000 will be just sufficient to cover the total cost. 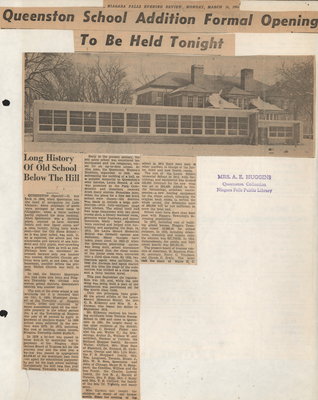