QUEENSTON - Though a number of class pictures taken in front of the "Old Stone School" in the village exist, the picture reproduced here is believed to be the only picture of the school itself. It is an oil painting by the late C. R. Kilkenny, who was principal of the school from 1891 till the present Laura Secord Memorial School was built in 1914-15. He continued as principal in the new school until his retirement in June 1918.

Mr. Kilkenny received his teaching certificate from Toronto Normal School in 1880 and after his retirement spent the rest of his life in Queenston.

The stone school was built in 1844, following the 1842 District Municipal Act which divided Niagara Township into 11 school sections, Queenston's being No. 4. In 1844, Queenston was a thriving place from where shiploads of goods were portaged by mule team to Chippawa, these being partially replaced by a horse railway.

Queenston in those days was reputed to have thirteen hotels, four liquor stores and a shoe factory hiring forty workmen.

The two classroom school was to provide education for some one hundred and fifty pupils.

As attendance declined, probably when the first Welland Canal was built diverting trade, and people moved to other localities, only one teacher was needed near the latter part of the century. The basement of the school was used for Methodist Church services, before the Methodist (now United) Church was built in 1862.

Though there seems to be no record of the cost of the school, in October, 1850, the Municipal of the Township of Niagara levied and collected by equal assessment upon all rateable property in the School Section No. 4 — the sum of £40, to apply in payment of teachers' wages.

The picture which recently came to light, is to be placed in the Laura Secord Memorial School. 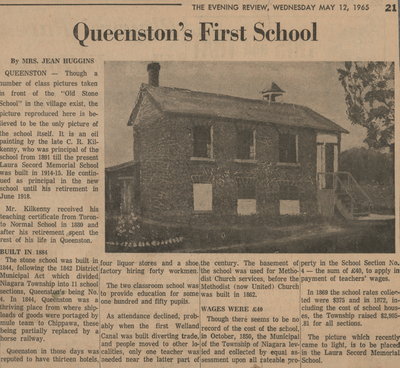