Text:
"In 1816, the Niagara Volunteer Fire Department recruited its first volunteers. These same firemen also built the first fire hall in Niagara in the Market Square (today's Court House parking lot). The fire hall was not large, but it was big enough to house their equipment; a handcart to carry buckets, ladders and axes.

In 1826, the Niagara Volunteer Fire Department became the first fire department in the history of Upper Canada to be incorporated by an Act of Parliament, thereby guaranteeing that all buildings would be protected by the fire department.

By the 1830's, three Niagara insurance companies had each hired six to eight firefighters. Insured houses had plaques over their front doors, so firefighters would know which company insured which house. They could only fight fires where their employers held the insurance. Three of these plaques can still be seen today - 120 Johnson Street, the Whale Inn, and in the new fire museum on Anderson Lane.

In 1834, the fire department purchased a new ten-man hand-operated pumper known as the "Man Killer," as well as a horse drawn wagon to carry axes, a horse-drawn ladder wagon, a hand-operated pump with leather hose, and a water wagon.

The firemen moved to their second fire hall in 1842 when the Court House was built. The firemen slept and the equipment was stored in the Court House's lower level (the present home of the NOTL Chamber of Commerce). A new bell in the tower summoned the firemen, and a large cistern (still under the drinking fountain in front of the Court House) supplied the water for firefighting. Water from the cistern was used in 1860 to fight a major fire; a fire, which consumed much of Queen Street's north side, from the Bank of Commerce building to Regent Street.

In the 1890's, the Town installed a water system, with fire hydrants, and bought hand-drawn hose reels. The new hoses - canvas on the outside and rubber on the inside - mildewed if not properly dried out. Thus a hose tower, on which to hang and dry the hose was built against the Town Hall and used until 1950. It was destroyed by fire in 1953.

The third fire hall was built in 1910, again by the firemen, on Queen Street (two doors from King St. on the south side). From 1910 until 1942, the firemen gave up their honorarium of $10 per year to pay for this hall. Horses were kept in two stalls at the back of the hall, and harnesses hung ready to be dropped onto the horses' backs at the slightest notice. The back upstairs portion of the hall was used to store hay.

In 1936, the Niagara Fire Department acquired its first motorized fire truck - a 1913 Reo with a thirty-gallon water tank. The horses were no longer needed, and the hay storage room became a meeting room. A second pumper was added in 1942, and the first pumper was converted into a ladder truck. In 1948 the townspeople collected donations to purchase an ambulance. This service ran until 1980 when the Ontario Health Department took it over.

In 1964, the firemen renovated Green's Livery Stable on King St. to make their fourth hall, donating, in total, seven thousand hours of labour. Around 1967 they bought a new pumper, as well as a rescue boat, motor, and trailer to assist the ambulance with river rescues. In the 1970's the department acquired a utility truck and another fire pumper. A Fire Museum was built in 1970 as an addition to the fire hall, but in 1987 the two merged when a newly purchased ladder truck was found to be too large for the existing hall. 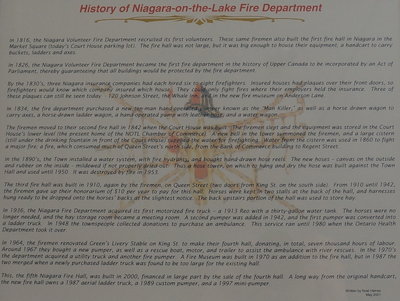