Full Text
Once upon 200 years.
NOTL celebrates 200th anniversary of the oldest library in Canada


What is remarkable about this week's celebration of the 200th anniversary of the Niagara-on-the-Lake Public Library is not necessarily its longevity, but the foresight of its founders, says head librarian Gerda Molson.

"The wisdom and foresight it would have taken for 41 proprietors to recognize how important a library would be to this very new and very raw country - that they would recognize the importance of beginning to build a library," is amazing, she believes. The 41 proprietors founded the library on June 8, 1800, asking for a $3 subscription fee that would serve to purchase books of high religious and moral standards.

"Sensible how much we are at a loss in this new and remote country for every kind of useful knowledge, and convinced that nothing would be of more use to diffuse knowledge amongst us and our offspring than a library..."

It is with those words, written in the first page of a record book detailing the first 20 years of the library, that the small group of farmers, merchants, ministers and a newspaper publisher established the province's first library.

Many of those 41 names, Molson says, still resonate within the community and within the region.

Molson explains the library was really a subscription library, requiring a fee of no more than $3 for the right to borrow a book, but it was not an exclusive club and anyone who could afford the $3, not a small sum in those days, was welcome to join.

In fact, she said, until 1812 the patrons included many U.S. soldiers, most of whom had heavy late fines for not returning books on time.

The non-exclusivity of that first library, she explains, is truly a precursor to the public library of today.

By the time war was brewing between the British and the Americans, the Niagara Library had 827 volumes (a ten-fold increase from the original collection of 80 volumes) but when fleeing U.S. troops set fire to the town in December of 1813 they did not spare the library, and most of those volumes were lost.

Although the library as an organization remained intact, it wasn't until 1848 and the creation of the Niagara Mechanics Institute that a large, public collection of volumes was once again available.

Interestingly, points out Molson, the Niagara Mechanics Institute lent more than just books, with their long list of rules referring to the borrowing of "each volume, piece or set of apparatus, drawing, model or specimen."

She isn't sure exactly what apparatus a library might lend or which specimens they might keep on hand, but the librarian points to the fact that even early libraries focused on providing knowledge and learning through any means, much (he way current libraries offer videos, CDs and even Internet access.

From posters preserved by the NOTL Historic Society -much of the information regarding the library was saved by Janet Carnochan, an early secretary of the Mechanics Institute who also formed the museum - it is obvious the library also held social events, most held as fundraisers with the admission fee of a quarter.

One poster advertises a concert to be held at the Casino in 1905 - a casino, points out Molson that was running in the Queen's Royal Hotel long before the Niagara Falls casino was ever contemplated.

The library also hosted many lectures, including a talk by Peter Me Arthur, "expert on pioneer life, agriculture, patriotism and libraries," said Molson.

The early library had many homes, including the newspaper offices of Andrew Heron and, as the Mechanics Institute, was housed in private homes and storefronts before moving to the Court House in the grand jury room and finally, to the old market stalls in the basement of the historic Court House, where it has remained for 150 years.

Molson points out when that speech was made and Kirby said the library was too small, it had a mere 4,000 volumes. Today, the library holds a collection of over 45.000 pieces and is finally planning to move to a new, larger library building of its own this fall, on Regional Road 55 on the edge of the Old Town.

With all the pomp and ceremony our town can muster -and no town can do it better than historic Niagara-on-the-Lake – the 200th anniversary of the oldest library in Canada was celebrated Thursday.

An enthusiastic crowd, complete with little ones waving the Canadian flag, turned out to hear Ontario's Lt.-Gov. Hilary Weston praise the historic town on the occasion of the library's bicentennial. "To walk about this town is to see history," she said. "Even the names of our schools reflect the past."

Announced first by the town crier, and escorted by the Fife and Drum Corps of Fort George, Weston arrived at the Court House steps in an elegant horse-drawn carriage, with Lord Mayor Art Viola, to be welcomed by library chairman Dave Eke and other dignitaries.

Immersed in history, one can easily imagine June 8, 1800 when a group of citizens gathered to launch another in a series of firsts, for what has become Ontario and Canada - a public library, Weston said. "As your own librarian Gerda Molson has said, The success and growth of this nation relied on free access to information,'" and remains true today.

Libraries are the hub of many communities, a resource and a gathering place, and that sense of community is underscored by the volunteers who contribute their time and skills for the benefit of their neighbours, she told those gathered in front of the Court House steps. And while the contribution of volunteers, the local heroes, may not draw the crowds of places like the Laura Secord house, their legacy "will be lasting and significant."

The library has brought people together for more than two centuries, she noted, providing knowledge and self-improvement, a place to communicate thoughts and enjoy companionship. "I hope many future generations will continue to share in this grand tradition."

Lord Mayor Art Viola spoke "in recognition and optimism" for the community that alone in Canada "can boast of 200 years of excellence. We are most fortunate, even blessed," and especially so, he noted, "when we behold our young people."

MP Gary Pillitteri was the only speaker to refer to the construction on Regional Road 55, congratulating the library on its bicentennial and welcoming the new library on behalf of his five grandchildren.

Meanwhile, about a dozen people quietly protested the library move from the Court House, with six signs proclaiming messages of "Wait for the court decision - what's the hurry?" and "152 years in the Court House - Stay there," "Keep our heritage library in our heritage town," and “It’s better by far to stay where you are."

Each demonstrator was also there to celebrate the occasion of its anniversary, carrying balloons to mark its 200th birthday. "Of course we're delighted," said NOTL Conservancy member Margherita Howe. "We love the library, but we can't ignore the fact that we're trying hard to overturn the decision to move it."

Conservancy member Judy MacLachlan handed out copies of a design prepared by renowned architect Phillip Carter, and explained that he had designed an addition to the Court House that would have been cheaper to build than a new building and given the public library more space, but aldermen did not consider his plan.

The peaceful and subdued demonstration, although it did not disrupt the celebration in any way, angered some who proclaimed their disgust at the protest.

But the highlight for many was the raised voices of Colonel John Butler students from Grades 1 to 3, singing of rainbows and rejoicing in building a better world.

"It takes a world of differences to make a difference in our world," they sang to the crowd of people quietly expressing their differences, but there to share in the celebration.


Street remembers NOTL volunteer
Niagara-on-the-Lake has a new street to add to its map - Anderson Lane.

Chrissy Kingma, a Grade 4 student at St. Michael School, has chosen what the town council feels is the perfect name for the new laneway into the town's Regional Road 55 property, where the new library and firehall will be located.

Kingma says she asked her mother how to choose a street name, and was told that often they are named after well-known townspeople. "Peggy Anderson was a lady who helped the poor a lot, and she died. I thought it was a good way to remember her," she said, adding that she was totally surprised but felt really good to have had the winning name.

Anderson Lane pays tribute to an individual who made a special contribution to our town - Peggy Anderson, one of the founders of Newark Neighbours and manager of the local charity for more than 25 years, Lord Mayor Art Viola explained.

The maverick volunteer was a mystery to many, with an indomitable spirit that was daunting to those who knew her. Not the typical volunteer - she could be crusty and difficult, but always to get what was needed for others, never herself - and by her dedication has set a tone for volunteerism in the community that is impossible to match, living the last 25 years of her life or more helping others. Her work with Newark Neighbours was recognized by all levels of government, including the local council in its volunteer awards with the Niagara Advance, but her death at 8O in December, 1997, came without the town having had a formal opportunity to stage an event to thank her.

The announcement of the winning name was made by the mayor at Thursday's 200th anniversary celebrations outside the Court House, with Lt. Gov. Hilary Weston and other dignitaries in attendance.

The choice, says Viola, made by council from submissions from students at each of the NOTL elementary schools, was difficult. But the winner, Anderson Lane, was an appropriate way to permanently recognize, remember and pay tribute, for many generations to come, "a woman who has done so much for NOTL in the spirit of volunteerism!!!."

In addition to the honour of naming the laneway, the St. Michael student a/so won $500 worth of books for her school library.

Ontario Lt.-Gov. Hilary Weston talks to the crowd at the Court House about the important role of a library as the hub of a community.

Chrissy Kingma, with Lord Mayor Art Viola and Lt. Gov. Hilary Weston, won the contest to name the laneway which will be the entrance from Regional Road 55 to the new library.

Librarian Gerda Molson holds up one of the items on display in the Lord Mayor's Chambers at the Court House to June 25, 10 a.m. to 5 p.m. The book is the List of Patrons of the library from 1800.

Judy MacLachlan and Marian McEwan quietly protest at the edge of the crown celebrating the library bicentennial. Their signs carried drawings of a design for an addition to the Court House done by architect Phillip Carter. “200 years in the Court House - stay there" and "This is what we can have - 200 more years in a historic building at less cost with more space” their signs read.

The Colonel John Butler School Choir, made up of students from Grades 1 to 3, entertained the crowd gathered in front of the Court House Thursday.
Notes
The celebration was part of Once Upon 200 Years, the year of anniversary events that began with the library's Gala Dinner in January. The ceremony also included the announcement of the name of the new street where the new library and fire hall will be located. The name was being chosen through a contest open to all students in NOTL. The winner was Chrissy Kingma, the St. Michael's School student, who chose "Anderson Lane" as a street name.
Date of Publication
10 Jun 2000
Date Of Event
June 8, 2000
Subject(s)
Conservation and restoration
Educational facilities
Libraries
Public libraries
Niagara-on-the-Lake, Ont 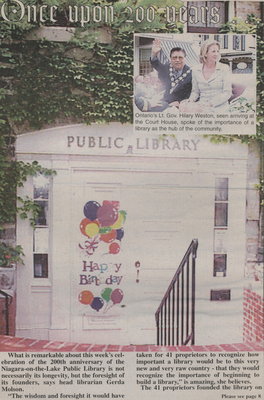